A Summer of L.A. Bodybuilding! 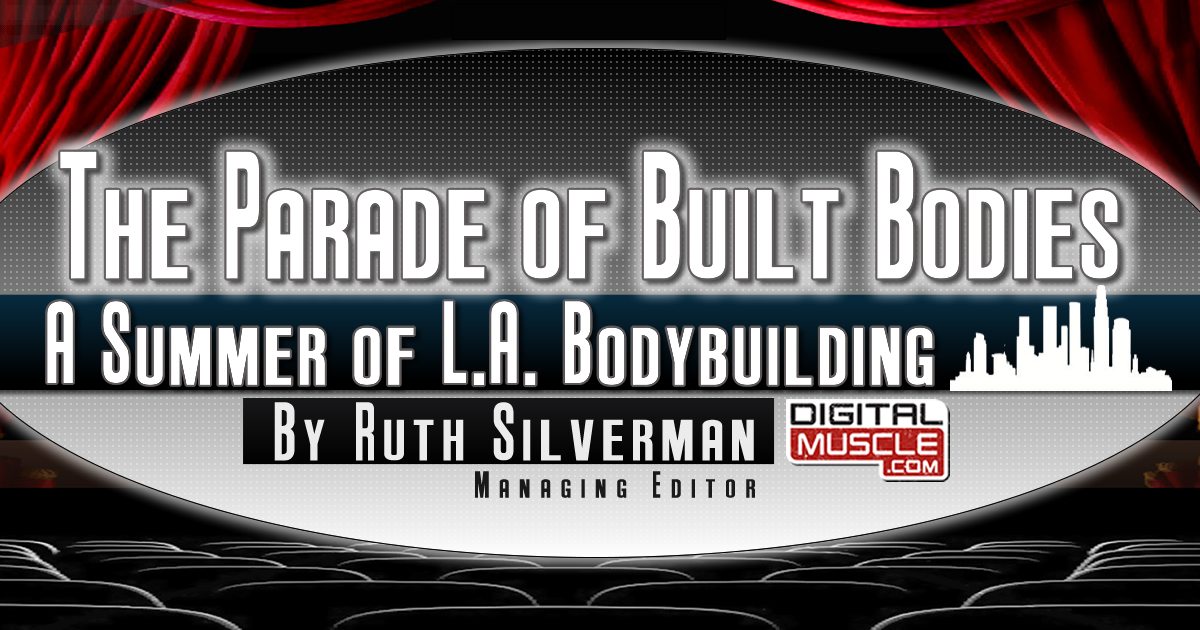 I’ll never forget the first bodybuilding contest I ever attended. It was a local show—the Los Angeles Championships, I think—and it was put on at the Veterans Memorial Auditorium in Culver City, a town that borders L.A.’s Westside and Venice areas. I had just been hired as the editor of Flex magazine and, frankly, had no idea of how I’d achieved that lofty position or wtf I was getting myself into. This show was to be my crash course.

The stage at the Veterans was a rudimentary one at the end of a big hall, a far cry from the Felt Forum at New York’s Madison Square Garden, the scene of my second bodybuilding contest. In memory, it was a room where wedding receptions might take place, but perhaps my memory exaggerates. In any event, I headed to my first competition armed with the following advice from a more experienced colleague: if you see a physique you like, check out the legs. In other words, don’t let a showy set of biceps and a big chest distract you from the total picture. That advice has served me well over the years, and it came through again at the NPC/IFBB California Championships, held as it has been for almost 20 years on Memorial Day weekend at that very same (albeit renovated) Culver City venue.

The Cal is always the first stop on L.A.’s big Memorial Day celebration of fitness and bodybuilding. It’s a huge amateur event—the state championships—plus, in 2004 the organizers added a professional contest. Originally, it was a women’s figure competition, but more recently the Cal Pro has featured men’s bodybuilding. It remains a show where you can always count on seeing the hot new athletes.

As the pros came out for the judging, I found myself in the media pit, handicapping the action with one of the amateur judges and a bodybuilding legend who is now a member of the media. The champ advised that Sasan Heirati of the U.K., who’d been sixth at his previous contest, was the guy to watch. Sure enough, when it was Sasan’s turn to pose, he was impressive—big, but not huge, and in good condition. “The best so far,” I said, and my friend the judge agreed.

Then, at the end of the lineup, three guys named Williams came onstage. I had seen them all before, but one really got my attention this time. California’s Gerald Williams had plenty of muscle but a much “prettier” physique than Sasan’s. He had a beautiful upper body, a tapered midsection and, yup, (I checked) legs to match, big enough to balance his arms. As I’m a sucker for that look, I said, “There’s your winner.” The judge was enthusiastic, but our companion insisted that Sasan would get the call.

Later, it turned out I was right. Gerald Williams scored a solid win, his first, but it was a win for me too—I had outpundited the champ. Always a good feeling.

I also I got a chance at the Cal to hang out with DigitalMuscle.com blogger Evina Del Pizzo, who had a bikini client in the amateurs. As there were several hundred competitors, and the bikini classes went up last, we had time for a good, long chat. Evina continues to amaze me with her enthusiasm for and dedication to everything she does. That day, she was acting as posing coach, roughly defined as helping her client make every second onstage count.

Evina also had clients in the Muscle Beach International Classic, which was held on Memorial Day proper, part of a three-day “weekend spectacular” that included the Raw Power Lift-Off on Saturday and the World Strict Curl Championship on Sunday. I wrote about the Muscle Beach shows after this weekend last year. They’re held on the boardwalk at Venice Beach on the three big summer holidays, in a small outdoor amphitheater next to the famous Muscle Beach weight pen. As always, it was a fun day in the sun seeing old friends and colleagues, like nutrition whiz Jerry Brainum, who’s now the publisher of Applied Metabolics, a newsletter for readers who want more than a skim about the latest research findings. Jerry shared some secrets of how he’s made a success of this latest venture, which is no small feat. Having edited the publication in an earlier incarnation, I can vouch for its value. Basically, Jerry knows his stuff.

Eric Weider, nephew of the late Joe Weider, the famed publisher and fitness entrepreneur (and donor of the Muscle Beach amphitheater), was on hand to cheer for a relative in the men’s physique division. The young man turned out to be one of Evina’s clients. Talk about a small world.

Backstage, where the weight pen serves as the pump-up room, there were built bodies everywhere, as you can see in the accompanying shot of Evina and vintage bikini competitor Karla KaBoom. Photographer Bill Comstock introduced me to a trio of young bodybuilders from Thunder Bay, Canada, who had just thundered into town. It was their first visit to L.A., and Boris Vladimirovich, Curtis Fredborg, and Andre Vaillant were bubbling with enthusiasm for their adventure. Though they overruled Bill’s suggestion that they could jump right into the contest, he did get the guys to take off their shirts for some seaside shots. (Ah, the perks of covering the fitness scene for Digital Muscle Media!) Thanks to Bill for sharing one with me. 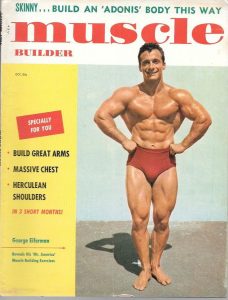 The Muscle Beach Hall of Fame honoree was the late George Eiferman, a champion of the late 1940s through early ’60s, who famously toured with Mae West and was the inspiration for the cartoon character “George of the Jungle.” (Don’t know who Mae West was? Google her.) Google Eiferman as well. He had quite a résumé, as a gym owner and entertainer, “an internationally renowned fitness guru who trained celebrities, bodybuilders and other athletes,” according to the “Las Vegas Sun.” George’s son Shawn Eiferman came from Vegas to accept the honor and greet the many folks who came up to recall memories of his dad. Ditto for Eric Weider, whose dad, Ben, was Joe’s partner in all endeavors.

If you’re headed this way, the parade of built bodies continues all summer at Muscle Beach (www.MuscleBeachVenice.com) and the Culver City Vets Memorial (www.MuscleContest.com). Also heating up the Southern California scene was the NPC West Coast Classic and fitness expo, which took place on June 17 in Riverside where I interviewed the winners backstage, my favorite gig of the year (www.NPCWestCoast.com).