Classic Physique Competition – I Love It!!!

In case you missed that, I love the new classic physique division. Love everything about it—the bodies, the posing, the posing trunks like tight black Jockey shorts. The fact is, I’ve been waiting for this division for years, ever since the NPC/IFBB chose guys-in-board-shorts over the amateur IFBB’s then-new “classic bodybuilding” division for their expansion.  Not that there’s anything wrong with men’s physique—the tremendous success of the division has shown the wisdom of their decision—but I tend to favor athletes with a little more muscle on their classic-bodybuilding lines, so I was a little disappointed. I should have known that wasn’t going to be the end of it.

When the coming of classic men’s physique was announced last year, I couldn’t wait for it to start, or for the first pro show, which took place in March at the MuscleContest event in Culver City, California. This new division was designed more for Men’s Physique Division athletes who were bursting at the seams, as opposed to bodybuilders who wanted to come down in size.

I was surprised that the 15-man lineup included three veteran flexers. Longtime IFBB pro Darrem Charles, a personal favorite, had pretty much retired from competition, while Danny Hester, a master-of-balance middleweight, had gotten his card in 2013 after a long amateur career, and Stan McQuay, another former middleweight, had been competing in the 212- and 202-and-under divisions since turning pro in 2002. How would they do? What did the judges want? Considering the experiences of most women bodybuilders who tried coming down for women’s physique, I wondered if they’d be considered too big.

When those 15 good-looking bodies hit the stage in Culver City, my first thought was that Darrem, always one of the “smaller” pros, looked too much like a bodybuilder, thick and solid, but he did look good. Danny and Stan stood out as well, along with a number of other physiques. When it came time for the comparisons, head judge Tamer El-Guindy called out five or six competitors, with Darrem, Danny and Stan in the center. I left the judging thinking that Darrem was going to win.

Wrong again, as the final results were unanimous, with Danny Hester earning his very first pro victory, Charles taking second and McQuay, who wasn’t as conditioned as the other two, in third. A few weeks later the Florida-based Darrem bested a lineup of 10 in Miami.  The win was the 10th victory for the IFBB veteran (he amassed 9 titles on the bodybuilding circuit).

Was there something to learn from those results, or were we just in the early days of a new division? I caught up with the IFBB’s El-Guindy last weekend at the Grand Prix Los Angeles to get some insight.

“Danny,” he said, “presented unbelievable symmetry. This is the most important thing. We’re bringing back the old beautiful classic look that really emphasizes symmetry and balance.”

Was there pressure on the panel? Of course, he said. “When you start a new division and are going to set up standards and protocols for years to come, it is always a huge responsibility. So as a judge you get a little nervous because you want to do the right thing for the sport.”

That the big three spots went to men coming from bodybuilding was strictly coincidence, Tamer said, pointing out that the winners in Florida had included former men’s physique athletes. Charles, Hester and McQuay had “definitely come down in weight and were pretty competitive with the guys from men’s physique.”

Even so, one obvious note in Culver City was that the former bodybuilders carried appreciably more leg mass than most of those coming from MPD. That’s not surprising considering it’s the body part the board shorts cover. El-Guindy agreed that may have given them an advantage and was something that men wanting to move to the new division should work on.

Classic physique competitors do mandatory poses at the judging—front double-biceps, side chest, back double-biceps, abdominals and thighs, and “favorite classic pose”—and routines at the finals. Most-muscular shots are not on the menu, and for amateur competition, the NPC sets weight limits for each height class, making it clear that mass is not the highest priority.

Beautiful, Zane-esque bodies plus posing—what’s not to love, love, love? Classic physique is taking off in the NPC, and some 19 IFBB pro shows are already scheduled for the 2016 season. As a fan or a prospective competitor, you definitely want to check it out. 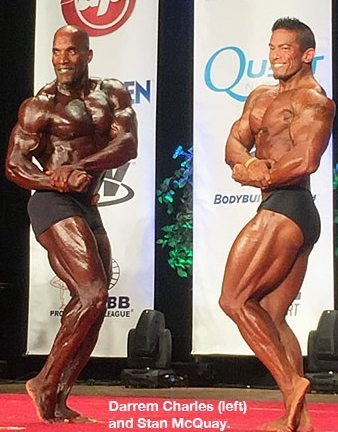