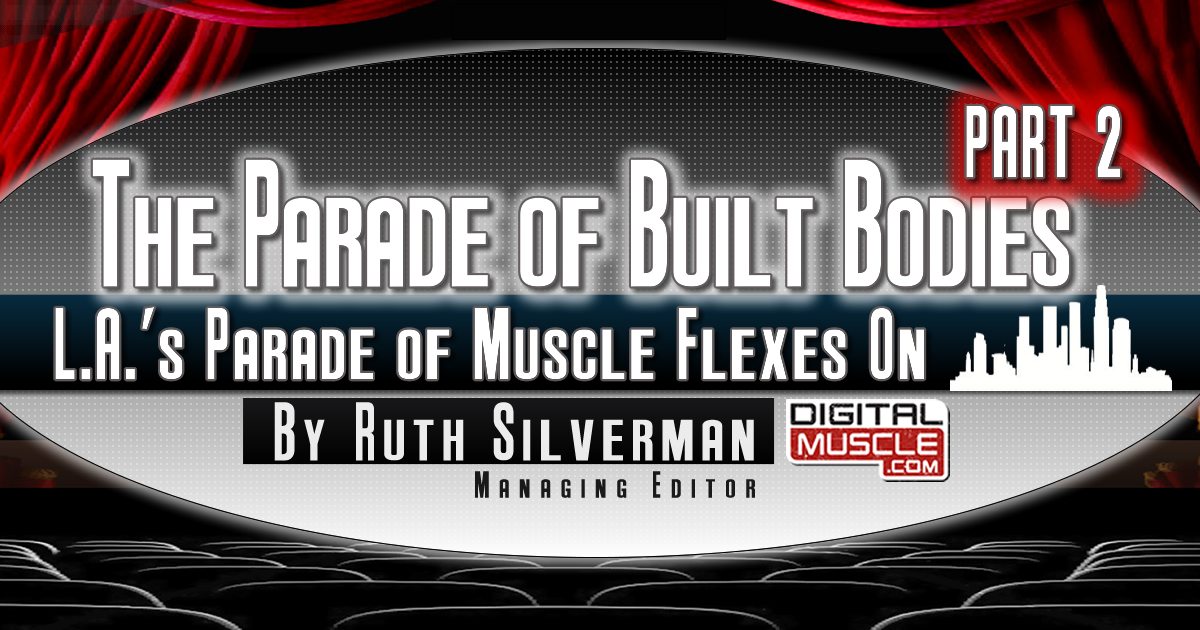 Last time I was waxing poetic about the Culver City Veterans Memorial Auditorium, the scene of so many Los Angeles bodybuilding, fitness, figure, and physique competitions. Since then, the local shows have taken me to fancier seats and settings, one of which actually brought a tear to my cynical eye.

The Southern California bodybuilding scene has certainly changed—no argument there. Not just since the Muscle Beach days of Arnold and Franco and, in the magazines, Rick Wayne and Gene Mozée, in the ’70s and ’80s, but also since the’90s and 2000s, when many of the print magazines (and their Websites) were based out here. Those have mostly disappeared, some having moved to New York, others having suffered the fate of print publications everywhere in the age of iPhones, social media and the Internet. All that said, we can still put on a razzle-dazzle show.

Which brings me to the NPC West Coast Classic…

This is my favorite local competition of the year, and not just because they let me do interviews and give out awards. I’ve attended since the show’s inception, in 1999, as the California Collegiate Championships, promoted then as now by my longtime Iron Man colleague Lonnie Teper, and have watched how this baby has grown. A couple of years ago, L.T. hooked up with Chris Minnes, who puts on the spectacular Tahoe and Ferrigno Legacy events, and they kicked it up a notch or three, moving the WCC to the historic Fox Theater in Riverside, California, a town located east of L.A., on the way to Palm Springs.

As an architecture geek, I love this building, a Spanish colonial revival–style structure built in 1929 and famous for having been the first theater to screen the 1939 classic “Gone With the Wind.” The elegant interior features comfortable seats and lots of dark wood, all and all a classy showcase for the hundreds of athletes who brought it to the WCC on June 17. It’s a busy night for me and my trusty videographer, Todd Tichonchuk—interviewing the overall winners as well as many of the vendors at the thriving expo. It’s also a chance to catch up with good friends Dave Liberman and June Munro, who’ve been coming from Ohio and the Bay Area, respectively, every year to help out.

As usual, the Southern California–based pros (and legends) were well represented, stopping by to check out the action all day. Reigning Classic Physique Mr. Olympia Danny Hester was on hand as an exhibitor. Four-time Mr. Olympia Jay Cutler, who appears every year and used to guest pose, gave a seminar and joined me for our “annual interview.” In it, he revealed he’s going into the meal-delivery business. I did not see that coming.

Superstar Oksana Grishina helped bring fitness back to the WCC and was the featured guest poser. She performed a couple of stellar routines, one in which Michael Jackson vanquished some bad guys and the other involving a black swan and three large dancing white swans—played by bodybuilders Brad Rowe, Jerome Ferguson and Vladimir Sizov. Clever, innovative, and it brought the house down. Oksana, who had choreographed the routines, taught the guys ballet, and also coached several of the competitors, was one busy swan backstage, but we managed to grab her for an interview, in which we talked, among other things, about her announced retirement from competition after the upcoming Olympia. What comes next for the Russian-born Grishina? Far from “retiring,” this bird is just beginning to fly.

For starters, there’s still the big show on September 16—and also the second annual OG Pole Fitness Classic, which takes place in October at the aforementioned Ferrigno Legacy show.

And then there was the L.A…

Not to be outdone by the plush digs in Riverside, my friends at Muscle Contest have brought bodybuilding back to the Redondo Beach Performing Arts Center, scene of the early years of the Iron Man Pro and many amateur competitions. As a correspondent covering the physique sports in Southern California, I spent a lot of time at this 1,450 red-velvet-seat theater located in an industrial park just south of the L.A. airport. Don’t laugh, but my (very old) car still remembered the way as I was heading south on the 405 for the Los Angeles Championships on July 22.

Nothing elevates a contest like first-class surroundings, and the RBPAC meets that standard and then some. The attractive rotunda lobby, where once a paved outdoor area lay, added greatly to the amenities, and it was filled, now as then, with exhibitors. I had to chuckle as I navigated the parking area and grounds, well populated with competitors, coaches, family, and friends, prepping their tans, makeup, suits and awaiting their time onstage. Some things never change.

It was a perfect Southern California day, sunny and not too hot. I arrived at the judging in time to see my new Digital Muscle teammate Dave Bourlet make the first callout in the amateur heavyweights. Very cool. Bourlet, who is a one-man video industry, recently brought his Muscle Beach TV to the Digital Muscle media hub. I can happily attest that he walks the walk. He finished fourth.

As usual, the NPC portion of the L.A. featured a large-plus lineup, with many of the athletes doing a “tune-up” for the USA, a huge pro-qualifier that would be held the following week. It also included a pro figure competition, with 24 worthy-but-anxious challengers, some of whom were new to the professional ranks and all of whom were seeking their very first pro win at the late-season event.

At the head of that list was Bojana Vasiljevic, an athlete who’s come oh so close so many times and was definitely “due.” She was at her best, and no one could touch her, I thought, although Carolyn Hudson Harris, who won the accompanying masters pro contest, came the closest. The judges agreed, and the native of Serbia was ecstatic to pick-up the first place trophy and roses, as well as her ticket to the Olympia lineup, at last. Also ecstatic, Bojana’s sweetie, Chris Minnes (see above), who was almost too verklempt to hang on to his videocamera.

Sometime during the judging, I got a text from a friend that there would be a special guest poser at the finals. Former fitness star Jenny Worth would be performing for the first time in years before coming out of retirement at the Tampa Pro two weeks later. Wow. Any thoughts of skipping the night show evaporated on the spot. Jenny, who’s a familiar face on the local contest scene with her clients from Worth It Training, thought that she’d be flying under the radar. (As I mentioned, the So Cal media contingent is not as robust as it used to be.) Instead, there I was, hoisting my iPhone camera, and word got out. She needn’t have worried. Her routine was terrific, and she took third in Tampa—at age 39 after 14 years away from the stage. Jenny promised to return next year—the Fitness O lineup is set for 2017. In the old days, someone might have suggested a special invite for this Worth-y athlete. (Did I just say that?)

Somewhere in the middle of this was another trip to Muscle Beach, on the Fourth of July, and the chance to spend some time with DigitalMuscle.com contributor Robyn Maher. Between competing as a bikini pro, promoting competitions, repping numerous companies, and pumping out recipes seemingly on command—not to mention raising three kids—Robyn has been all over the map, literally, this year. Look for more from Robyn’s Kitchen as the lazy, hazy, crazy days of summer roll on.

The Muscle Beach Hall of Fame inductee was Kent Kuehn, a bodybuilding champ of the late ’60s and ’70s, longtime trainer at Gold’s, Venice, and fixture on the expediting crews at Southern California shows for longer than I’ve been around. The event brought out familiar faces from that era, a number of whom made it to the “Muscle Beach breakfast club,” hosted by Eric “the Trainer” Fleishman at the nearby Erwin Hotel.

More from Ruth Silverman? Visit her page here at DigitalMuscle.com