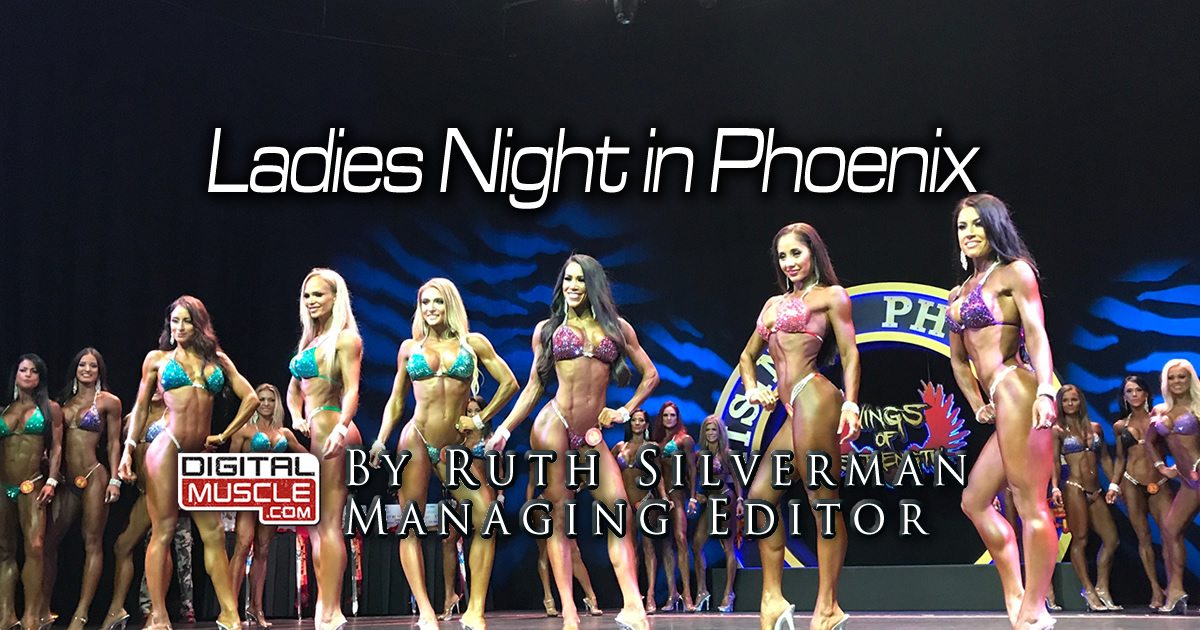 Oh, wow. I am so jazzed for the upcoming Olympia weekend after watching the IFBB Wings of Strength Rising Phoenix Women’s World Bodybuilding Championship and the IFBB Arizona Women’s Pro on the free DigitalMuscle.com Livestream on Saturday. For one thing, the Tim Gardner production, now in its third year, is a female-centric show, with a bill that includes all five women’s divisions. For another, Dan Solomon and my DM teammates did a bang-up job of providing the best coverage of this kind I’ve seen (and I’m not saying that because I work here). The athletes were near and clear, and the audio was excellent at the night show. Watching on my laptop, it was as close to being there as possible, which gave me a good look at the state of the two divisions that have long been rumored to be on the endangered species list, women’s bodybuilding and fitness.

I’m happy to report that the news is good.

Rising Phoenix—If You Build It, They Will Come

Full confession: I’d kind of lost track of women’s bodybuilding the past couple of years, although I thought the choice of two-time Rising Phoenix winner Margie Martin was a good one and good for the sport. The show’s name is symbolic—women’s bodybuilding and its athletes rising out of the ashes after they were dropped from the programs at the Olympia and Arnold Sports Festival. Also because it takes place near Phoenix, at the Talking Stick Resort.

The story of how Wings of Strength founders Jake and Kristal Wood, along with Tim Gardner, have triple-handedly, helped bring back the WBB division is one of passion and persistence. These guys know how to make their athletes feel special. The bodybuilders are invited to create their own intro videos, which play before they come out for their posing routines. How cool is that? The $100,000 purse includes $50,000 plus a custom Jeep to the champ and money awards for Best Poser, Most Muscular, and Best Intro Video. Even cooler. In total, nearly $200,000 was awarded across all divisions. Not too shabby!

Twenty-three athletes qualified for the bodybuilding world championship, which makes the point about the health of the division. One reason is efforts of Jake and Kristal, Tim, and other promoters who continue to support WBB with class competitions, like Ron Hache at the Toronto Pro, Jack and Ann Titone at the Omaha Pro and Gardner in Tampa. Another is that the athletes have responded, entering those contests in solid numbers, which was not always true a few years back.

With Martin and last year’s third-placer, Alina Popa, not competing, the show was wide open. The action onstage came down to a tie between Helle Trevino and Sheila Bleck, last year’s fourth- and second-placers, with Trevino eventually getting the nod. I preferred Sheila’s look, but that’s how it goes. She got the Best Routine award, with Aleesha Young, earning Most Muscular honors and Sylvia Matta of Italy killing the competition with her artistic intro video.

Fitness. It’s not that I’ve tuned out to fitness; it’s that I’ve only been to the Olympia and Arnold lately and so have missed seeing many of the athletes who are coming up. Watching a YouTube video is not the same as watching 13 fitness routines in a row from an orchestra seat like the one I had for the Arizona Pro.

It’s no secret that the number of fitness competitors has declined since the division’s heyday in the ’90s and early 2000s, when it and women’s bodybuilding were the only games in town, and it’s not as easy to find an amateur fitness competition as it used to be (besides the pro qualifiers). Figure, which doesn’t require a routine, had a lot to do with that, along with the newer divisions, which all attracted women who didn’t have the time or didn’t think they had the talent for the routine round. Longtime fitness diva Tanji Johnson, now retired from the stage, has been promoting her Save Fitness campaign for years, encouraging newcomers into the sport and encouraging promoters to include it. Promoters like Tim Gardner and the others mentioned above have stepped up to the plate on the pro level. This year’s schedule included 13 shows—one year in recent memory there were five.

Others who are doing their bit on the amateur level include eight-time Olympia champ Adela Garcia, as a promoter and trainer, and current diva Oksana Grishina, who recently coached athletes for the first NPC fitness division held in Southern California in many years. Still, with Tanji gone, and two more stars retiring this year, Grishina and Regianne Da Silva, I’ve been wondering where the new divas were coming from. I’ve got my answer now: from shows like this one.

In Phoenix, Giorgia Foroni, Derina Wilson, Savannah Hodges, and Veronic Comtois had impressive routines, and they all made the top five behind veteran Ryall Graber, who took first. Can’t wait to see what they’ll bring to the stage next year.

The lineups at the Arizona Pro each had a “favorite” going in, a top athlete who, like me, was doing it as a tune-up for the Olympia. They all won, not surprisingly—Graber in fitness, Cydney Gillon in figure, Jennifer Ronzitti in bikini, and Heather Grace in women’s physique—and are on track to finish in the money at the big show next weekend.

Speaking of which, I’ll see you there. Time to start packing!