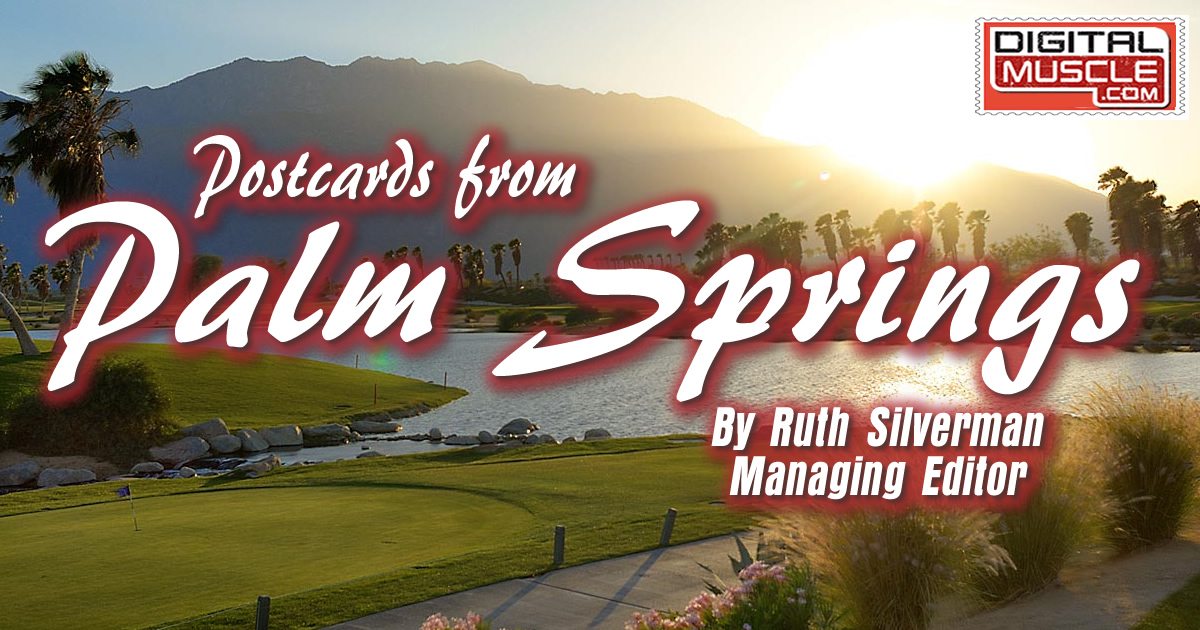 Who doesn’t love a weekend in Palm Springs? The Southern California desert oasis is the perfect antidote to whatever you need a break from. Add a first-class bodybuilding show and the chance to hang with industry friends, and you have a recipe for a Ruthlessly good time at the NPC/IFBB Ferrigno Legacy, which was held at the Palm Springs Convention Center and the Agua Caliente Casino resort on the weekend before Thanksgiving. SoCal superpromoter Chris Minnes, in partnership with Lou “the Incredible Hulk” Ferrigno and Lou Ferrigno Jr., has grown the event to a full-fledged fitness festival in just four years, and it is a magnet for athletes: 158 pro competitors in five divisions and nearly 400 amateurs got onstage this time. I love that the champ trophies are statues of the Hulk!

The two-day “Flexpo” was new this year and started big—some 250 booths filled the convention center pavilion. I arrived in time to catch the “Coffee With Lou” seminar, with Ferrigno and fellow legends Rich Gaspari and Shawn Ray telling stories and taking questions. Tom Platz was on hand for a later seminar, but I was busy watching the Oksana Grishana Pole Classic before rushing to the pro judging. It was that kind of kind of day.

After Coffee With Lou, I headed to the stage at the far end of the pavillion and ran into my old Webcast partner Traci Lynn Cowan, who was doing video interviews for Oksana. We found the now-retired champ doing a million things backstage, but she stopped long enough for a hug and a photo and then was off. This is the second year that Grishina has put on her pole-fitness competition for the PCS league, which holds its big championships at the Arnold Sports Festival.

Oksana’s love for the pole goes back to 2014, when she first performed on the aparatus in her fitness routine. She has added her own twist to the competition, a physique round in the pro event. “They should first look like athletes, eat healthy and work out,” she exp-lained. “Then they would inspire so many people by the way they look and the incredible things they can do on the pole, which everyone can learn.” Even people who have fear of heights, Oksana? (Asking for a friend)

Re the OG Classic. Pole fitness continues to fascinate me. It has outlived the early pole-dancing jokes to become an increasingly popular option in a crowded fitness market and also as a competition. The routines at the OG Classic were marked by artistry and gravity-defying moves, and the numerous guest performers included Cyr wheel master Sam Tribble and Grishina herself. Oksana and her team, like the Ferrigno producers, want their athletes and audience to have a memorable experience, and they accomplished their mission. In its sophomore year, the OG Pole Classic kicked it up several notches in terms of of the production as well as the talent and sophistication of the athlete performances.

Re Traci Lynn Cowan. I first teamed up with Traci when we did the Webcast play-by-play at the Arnold last year and have followed her progress with interest. The Canadian transplant—who holds a mic with the same poise she demonstrates on a figure stage—is going gangbusters with her talk show, “TCLUnleashed,” which streams live on Tuesdays on PowerOfVoices.com, as well as on Facebook and YouTube. Also growing like mint are her work as a trainer and lifestyle coach and her sideline as a red-carpet host at Hollywood events. If they don’t call her the “Fittest Host in Hollywood,” they ought to.

Fitness is only the beginning of the subjects Traci covers on her show—last week she interviewed a U.S. Army coronel about his book on combat stress; this week she’s getting a makeover. She’s even threatening to have me on sometime soon to discuss my adventures in the iron game media. Should be fun.

Personal best. Dashing across the FlexPo to make the judging for the Ferrigno Legacy Pro, I was stopped cold by the display at the VPX Sports booth. Fit models with Hula-Hoops. That I can do! Let the accompanying photo attest that the kid from Pittsburgh has still got it. The VPX ladies were very impressed.

The show. The men’s open brought out the big guns—26 flexers and a biceps-to-biceps showdown between Arnold Classic winner Cedric McMillan and Brandon Curry. The Incredible Hulk trophy went to Curry, who had it all the way, according to the score sheets. A week later McMillian was first and Brandon third in at the San Marino Pro—but this call was the right one. Curry keeps getting better.

Robert Timms whipped a lineup of 27 to take the title in classic physique for the second year in a row, while Stan Morrison beat out 33 others in men’s physique. Brazil’s Priscilla Caviha topped the 38-athlete lineup in women’s physique, and Ruth Wood got the nod over 33 others in bikini.

The highlight for me was 212 star Jose Raymond, a.k.a. the Boston Mass, who jumped into the open at the last minute and managed to get fourth. I covered Jose’s amateur career—when he kept earning pro cards and turning them down—and he’s always been a favorite. With Jose’s wife, Michala, competing in the pro bikini lineup, it was a real family affair.

Speaking of favorites. What a rush seeing the great Milos Sarcev in the media pit doing play-by-play for MD. The Serbian-born Sarcev, who was famous for his symmetry-over-size aesthetics, migrated to the States in the ’90s and was living in San Diego—with the late Sonny Schmidt—when I profiled him for Iron Man in August ’92. Sarcev had been living in Europe most recently and was happy to return to Southern California. Welcome back, Mishko!

More favorites. I’d been hoping to get a word with Bojana Vasiljevic ever since she did the impossible: making the top 10 at the Figure Olympia after taking all year to win a contest and qualify. As she was giving a seminar on figure posing with her fellow pro Wendy Fortino, I knew I’d get the chance. In the past, someone with Bojana’s record might have finished in a tie for 16th, along with 15 to 20 others, but not the Serbian-born Vasiljevic, who acknowledged that she’d hit the stage eight times before getting the win but believes that she beat the odds by improving all through the season. “I increased my muscle mass onstage by 10 pounds,” she said. “People say you can’t do that, but I proved that it was possible.” What’s her secret? “Consistency,” she said. “Eating in my case was the key. Before, when I was in off-season, I would eat two times per day, just when I was hungry. But now I keep pushing myself to eat six, seven small meals per day—all year long, nonstop, everyday.” As a result, “It was always competition season in my mind,” she said. So instead of looking her worst at the end, she looked her best.

With the rules for Olympia qualification changing to a new points system for 2018, Bojana may have to compete all year again to make it to the O. Having gotten the judges’ attention at last, she may have an easier time of it.

Good times at the finals. Full confession. I missed a couple of divisions at the finals, but I was having too much fun chewing the fat with a great group of women who just happened to run into each other on the way to the ladies room—athlete and coach Missfit Bennett, bikini pro and physician Stacey Naito, and longtime VIP ticketholder Gretchen Saaduddin. A conversation with any one of them is always informative and entertaining. Together we were on fire—no topic taboo. In fact, we were so engrossed, we forgot to take a selfie.

Speaking of familiar faces. I thought I recognized the pretty blonde who was rocking a tiny baby in an empty corner of the lobby. It turned out to be Jessica Mone, formerly Jessica Paxson, figure and then bikini standout of just a few years ago and new mom. Jess was there to support her hubby, Blair Mone, in the men’s open, but with a sleeping babe in the carrier, she was would have to do it outside the theater—and quietly.

Final notes. Another thing I missed was the wedding. Lou Sr., who has the credentials, actually married a couple at the expo. That’s something we haven’t seen at the Olympia or anywhere else—yet. I did get a walk around the FlexPo, inspecting all the latest equipment and clothing and sampling at the food exhibits. Time prohibits mentioning everybody I chatted with, but a special thanks goes to Bruce “On a Quest” Cardenas, for keeping me up to date with all the latest bar flavors. This time it was Birthday Cake, now my new favorite. Who knew something without chocolate could be so delicious?