Testosterone is arguably the most important hormone produced by the body. It’s responsible for the proper function of so many organs and its decline has detrimental effects on muscle gain and fat loss. The questions behind testosterone production have puzzled healthcare professionals and fitness enthusiasts for decades, but a group of German scientists might have finally found the answer.

RPN Research brings you D-HD Revitalize Max, a natural testosterone increasing product. What makes this test booster so special is found right on its label.

This product contains 50mg of Zinc (300% more than the market leader), 200mg of Magnesium, and 25mg of Vitamin B6 (1,000% more than the market leader). Together, this trio of ingredients is known as ZMA, a powerful compound that has been found to increase total and free testosterone levels by up to 33%. Other studies have found ZMA to play a role in increasing strength, muscle protein synthesis, and REM sleep when taken at night.

Next up is 3g D-Aspartic Acid, a naturally occurring amino acid naturally synthesized in the body’s neuroendocrine system. Studies have linked DAA supplementation to increased level of luteinizing hormone and testosterone by 33% and 42% respectively. Both of which play a crucial role in the regulation of male and female sex hormones.

Tribulus Terrestris is a common ingredient amongst testosterone boosters and plays a large role in the science behind Revitalize Max. At 500mg per serving, tribulus terrestris has been found to increase luteinizing hormone by as much as 70% and thereby elevate testosterone production by 40%.

The pro-hormone ban of 2012 gave way to the popularity of SARM’s and when the latter became illegalized, dehydroepiandrosterone rose to prominence. Due to its effect on natural testosterone production, DHEA is one of the most widely regarded supplements on the market. A precursor to testosterone, DHEA is naturally synthesized in the body but levels decline with age. A typical dose of 25-50mg daily is recommended to prevent the testosterone tumble.

Now that we have discussed almost every ingredient in RPN Research’s testosterone formulation, let’s look at the science.

In a small 12-month study of healthy overweight men with a low baseline testosterone level, there was found to be a significant increase in total testosterone due to a steady dose of 3,000 IU of vitamin D.[1]

The majority of the population is vitamin D deficient, especially those who live in cold climates with limited exposure to the sun. Supplementing with 4,000 to 5,000 IU/day of vitamin D3 has been found to increase testosterone by 30%. The same study found that an 80mg dose of zinc yields similar results.[2] 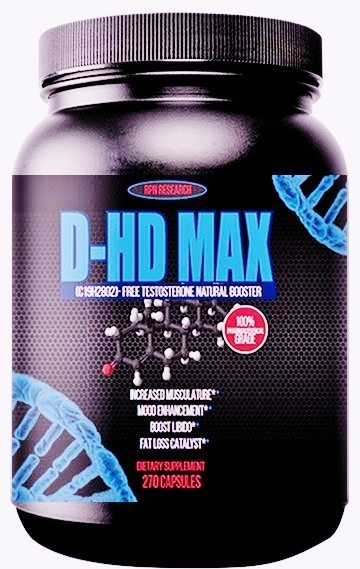 As you can see, vitamin D3 at 5,000IU is the meat of this supplement and the basis for its creation in the first place. It’s inclusion is revolutionary and beneficial to all who are plagued with low testosterone and other debilitating illnesses from the common cold to most cancers and heart disease.

The science is there to support vitamin D supplementation, making this product unique and interesting. While taking this product, I found an increase in sex drive, strength and endurance. My skin also seemed to be healthier to the touch and to the eye. Having said that, I did not have blood work done regularly and cannot speak to it’s affect on personal testosterone levels. If I am reviewing this product based purely on the “bro-scale,” I give it an 8.5/10.

Is there a hormone boosting supplement on the market you are weary to try? Shoot me a Facebook post, tweet, email, etc. and let me know! Perhaps I will be your guinea pig, and give my unbiased (and critical) opinion.

After a series of concussions ended his high school wrestling career, Matt discovered bodybuilding, quickly immersing himself in the world of fitness, nutrition and supplementation. A National Academy of Sports Medicine Certified Trainer, Matt founded UFit Sports Performance and Nutrition and has helped dozens of clients achieve their fitness goals. Having tried and tested countless supplements, Matt is highly regarded as a credible evaluator of nutritional products.