Is a Bikini Contest a Beauty Pageant? 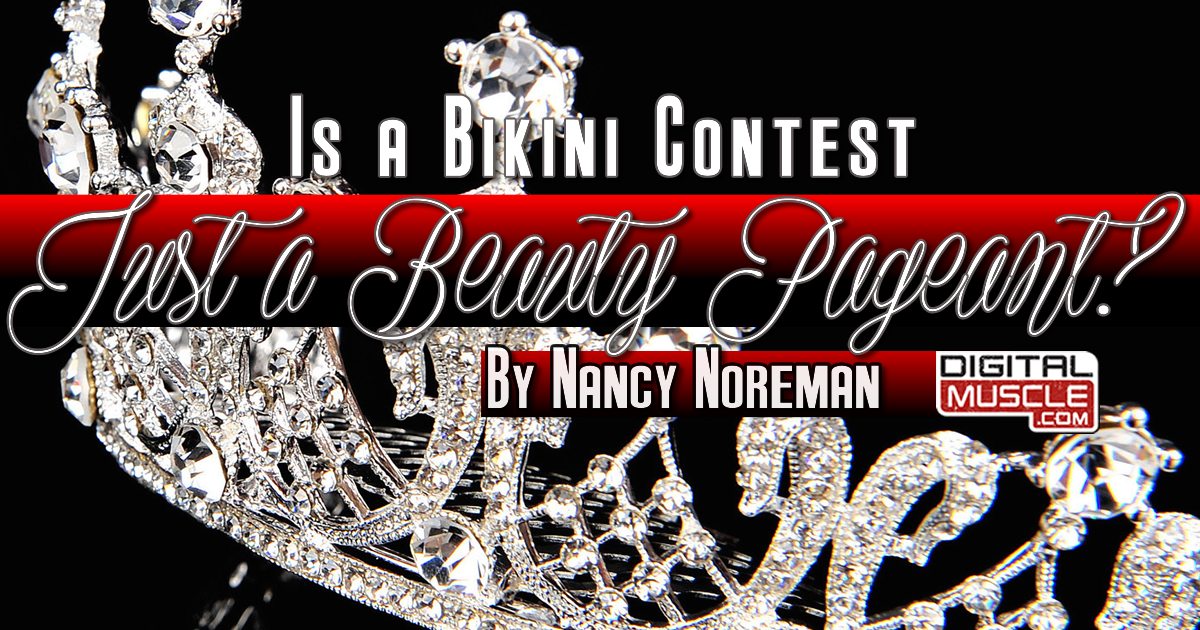 Anyone who attends a bodybuilding or fitness event knows that the audience will be made up of the usual characters.  Those who feel they should get a free ticket because they’re gonna get their pro card this year; who have a contract with a prestigious supplement company that hasn’t even launched yet; who are rising contest prep gurus, living with their parents to save money; who skipped doing this show because they’re waiting for the next show; who look better than the guy or girl onstage right now; who make critical remarks about everyone onstage.… Ah, yes. We all know those people!

One division that seems to attract a lot of attention is bikini. Since its inception in the NPC in 2009, the bikini division has often been reviewed as a beauty pageant. You hear it all the time when you’re sitting in the audience. I guess it seems a bit strange to go from watching BIG muscle men to these 22-inch-waisted women.

When I saw the first NPC bikini competition in New York, it was a very low-caliber lineup that looked as if they’d literally pulled girls off the beach. I thought, “No way will this make it.” Then, at the next show, there was a 50 percent improvement in the physiques. Next, the coaches started creating teams, educating the competitors, and it exploded!

Still, you hear the comments about beauty pageants. It got me thinking: what exactly is the difference between beauty pageants and bikini competitions?

My dear friend Laura Slifer has seen it from both sides. She has been immersed in the beauty pageant world since she was a little girl and her mom produced the program book for the Miss Colorado pageant every year. Besides doing makeup and coaching pageant competitors, Laura has spent plenty of time onstage. Her pageant résumé includes these credits:

In 2016, Laura took on a new challenge and entered a couple of bikini shows. She was not a complete neophyte, as she is familiar with the fitness scene, having done tanning and makeup for competitors in the past. She held her own in the masters and open bikini divisions at the NPC Colorado Open and Iron Maiden events, taking second in the masters 45-and-over at both contests. Who better, I thought, to help clear up my bikini vs. pageant questions?

What’s one main difference between competing in a beauty pageant and doing a fitness or bikini contest?

Laura: The interview competition. In pageants, there is always an interview portion, where the contestants have an opportunity to meet and talk with the judges, and the scores earned are included in the final outcome of the competition. In fitness, it’s strictly a physical competition.

Is there something you missed about the pageant world when you were competing in bikini?

Laura: If there’s one thing I miss, it’s the opportunity to get to know the other competitors more. Pageants are typically spread out over several days, while a fitness show is typically one day. Every competitor has a “story” or a reason behind why she is there, and the stories, in my opinion, are all interesting and what makes each competitor more human.

What skill did you bring from your pageant experience that you feel helped you in bikini?

Laura: Probably my stage presence and experience. I’ve judged several pageants in the past, and it is very important to walk on that stage with confidence, poise and attitude! It’s the “it factor” that may help you edge out another competitor.

People say that bikini is a beauty pageant. Would you agree?

Laura: In a sense, yes—and, why not? Whether you’re competing in a beauty pageant or bikini or figure or whatever, you MUST put in the time, effort, work, training, and sacrifice to bring the best possible “you” to the stage!  In bikini, we work hard, practice, train and get beautiful, in sparkly suits and heels.

Now that you’ve tried both types of contests, if you could only do one or the other—bikini or pageant—what would you choose?

Laura: Oh that’s HARD! If I had to pick, I’d go with bikini at this stage, and here’s why.  I’m almost 50 years old. I did my first show as a challenge to myself to see if I could lose that middle-aged spare tire and motivate myself to get up on stage again with ladies half my age. I didn’t believe I could do it, but I did. I lost 25 pounds but gained so much more.  I gained, confidence, strength, belief, and a sense of accomplishment again. I’m in better shape and health now than I was 10 years ago! So, yes, bikini it is!

Laura: If there are other ladies out there who are contemplating bikini competition, do it! It doesn’t matter your age, where you live or what you do. It’s a mindset. It’s a decision. Reach out to others who have done it and/or find a buddy to do it with! It’s fun, refreshing and empowering!

Nancy Noreman has been in and around the fitness & bodybuilding industry for decades. Check out her page here at DigitalMuscle.com for more of her industry insights.

Nancy Noreman has been immersed in the fitness industry for more than 25 years.
Her unique perspectives, coming from her experiences as a supplement maker, media host, fitness model, trainer, designer, author and wife to one of the brightest minds in the sport, has made her a keen observer of all facets of the fitness lifestyle. Formerly the owner of Nuclear Nutrition, Nancy is also a judge for the United States Pole Dance Federation (USPDF), as well as a trusted insider on the bodybuilding scene.