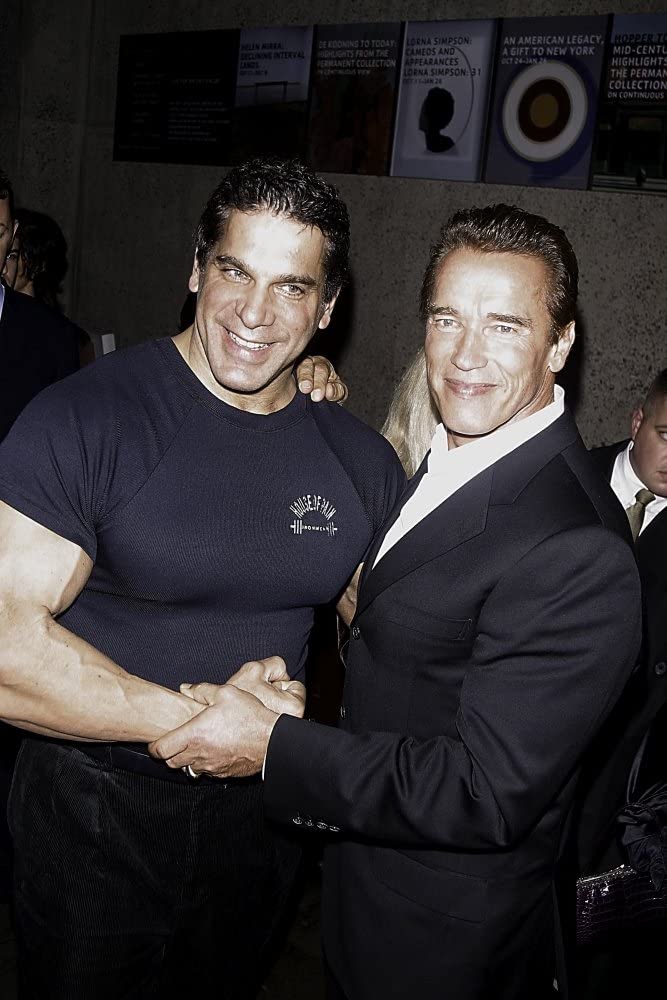 One of the greatest rivalries in the history of bodybuilding was between Arnold Schwarzenegger and Lou Ferrigno.

It was the battle between the cocky king of bodybuilding and the insecure underdog and it was captured on film in the cult classic movie “Pumping Iron” in 1977.

It was because of the scenes in that movie featuring Arnold and Lou that the rivalry between these two iconic bodybuilders will be remembered forever in the bodybuilding world. The psychological interaction between the two of them is probably the most interesting point of the classic documentary.

The similarities between Schwarzenegger and Ferrigno helped to create the hype between these “Battle of the Giants”. Both Arnold and Lou were tall, big bodybuilders. Arnold stood 6’2” and weighed between 230-240 pounds. Ferrigno was even bigger, standing 6’5” and weighing an enormous 275 pounds for a competition. They both had similar physiques with their strong points being huge arms and a massive chest. However, their differences suck us in to see who was more dominate.

Arnold was born in the small town of Graz, Austria on July 30, 1947 where he began lifting weights as part of his training for the soccer team he belonged to when he was 15 years old. After being inspired by Mr. Universe Reg Park, Arnold decided to give up playing soccer and focus solely on bodybuilding. He wanted to win the Mr. Universe title like his idol and then grow up and make movies. Reg Park had starred in several Hercules movies and Arnold wanted to follow in his footsteps.

Lou Ferrigno on the other hand, was born on November 9, 1951 in Brooklyn, New York. He was four years younger than Arnold and he shared many similarities with him. Lou’s father worked for the police department just like Arnold’s father had. Lou also started working out with weights at a young age after being inspired by another cinematic Hercules, Steve Reeves.

Lou was skinny when he started lifting weights so he trained hard in the hope that he could look like the superheroes he admired in the comic books as well as the legendary Reeves.

Ferrigno started competing as a teenager, just like Arnold. When Lou was 17 years old, he saw Arnold compete live at the 1969 Mr. Olympia at the Brooklyn Academy of Music. Arnold was competing in his first Mr. Olympia that year and when he walked off stage, Lou realized that here was a tall, big bodybuilder he could emulate.

Lou developed very quickly and filled out his enormous 6’5” frame. At only 21 years old, he won the overall title of the IFBB Mr. America contest in New York. Because the Mr. Olympia also took place along with the Mr. America, both Lou and Arnold took pictures together for the magazines at the end of the competition. Standing next to Arnold, Lou looked bigger and taller than the current Mr. Olympia winner but Arnold looked more cut and finished.

Only weeks after winning the Mr. America contest, Lou traveled to Geneva, Switzerland to compete in the IFBB Mr. Universe. In a stunning upset, the young Ferrigno beat top contenders Ken Waller and Mike Katz at only 21 years old.

After this impressive victory, the bodybuilding magazines started talking about the excitement of a possible Schwarzenegger-Ferrigno showdown.

In 1974, the highly awaited confrontation between Arnold and Lou was about to become a reality. An article in Muscle Builder/Power magazine showed Ferrigno holding Arnold’s head in his hands over his head with the headline, “Bring Me the Head of Arnold Schwarzenegger!” 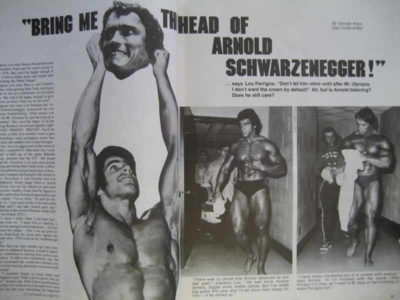 The bodybuilding fans salivated at the prospect of a Schwarzenegger-Ferrigno showdown at the 1974 Mr. Olympia contest.

As a treat to the fans, both Schwarzenegger and Columbu guest posed at the event. Arnold looked tremendous that night, bigger than ever with an outstanding presentation. He looked unbeatable only months away from the Mr. Olympia contest.

Exactly one week later, the now two time Mr. Universe Lou Ferrigno entered his first Mr. Olympia contest at the Felt Forum in Madison Square Garden against Arnold Schwarzenegger. Lou faced Arnold directly in the Over 200 Pound Class, the first time that weight divisions were held at the Mr. Olympia contest. Franco Columbu competed against Frank Zane in the Under 200 Pound Class.

Weighing 237 pounds, Arnold was bigger and thicker than ever. He was planning on retiring after winning his fifth Mr. Olympia title and he wanted to go out at his absolute best. The anticipated showdown between Arnold and Lou Ferrigno was not as close as the fans expected. Lou looked like he tried to get too ripped for his Mr. Olympia debut and Arnold easily out massed and out classed the newcomer. Arnold’s confidence and charisma on his fifth Mr. Olympia win dominated the contest and neither Ferrigno, Columbu or Zane had a chance.

The following year would be a momentous one in the bodybuilding world. George Butler, the photographer of the famous book Pumping Iron, was planning on directing a movie on bodybuilding under the same name. At the beginning of 1975, George was making plans on which bodybuilders to feature in his documentary. Of course, he had to have Arnold Schwarzenegger in the film. Unfortunately, Arnold was now retired from competing and he was concentrating on his new film career. At the beginning of the year, a drastically downsized Arnold was in Birmingham, Alabama filming “Stay Hungry”, a new movie starring Jeff Bridges and Sally Field and based on the fictional book by Pumping Iron author Charles Gaines. 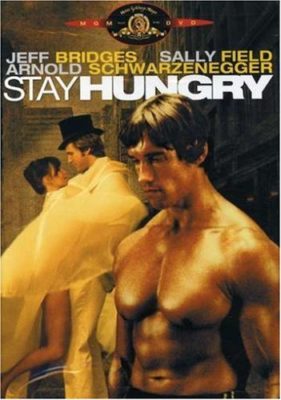 George approached Arnold in Alabama and asked him to star in his new documentary. Arnold at first said no because he was not planning on competing again. George finally convinced Arnold that the movie “Pumping Iron” would be a great way to promote his new movie career. After agreeing to pay Arnold a hefty fee of $50,000 to appear in the movie, Arnold agreed to compete in the 1975 Mr. Olympia.

As Butler was looking to create storylines for the documentary “Pumping Iron”, he decided to make Lou Ferrigno the primary nemesis to Arnold. Of course, Schwarzenegger would be the confident king of bodybuilding while Lou would be the innocent underdog who is trained by his domineering policeman father. 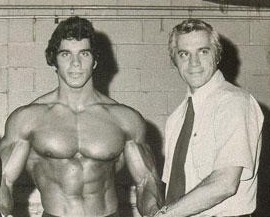 Arnold would not be the hero with Lou as the villain. Instead, Butler planned to play on Lou’s insecurities versus Schwarzenegger’s ruthless will to win.

Butler filmed Arnold in sunny southern California contrasted with Lou training in cold and gloomy New York. The cameras followed the competitors to Pretoria, South Africa to capture the action of the 1975 Mr. Olympia contest. One of the highlights of the movie was when Arnold and Lou met for breakfast on the morning of the contest. Arnold promised to psych out Lou in a previous scene and now the psych-out scene was filmed by the cameras.

Arnold began by telling Lou and his parents that he called his mother earlier that day and told her he won the contest already. As everyone at the table nervously laughed, Arnold looked directly at Ferrigno and asked him how he was doing? He told him he looked a little nervous.

In a classic showcase of gamesmanship, Arnold cuts through Lou’s limited confidence by telling him that he needed a little more time to be ready. But, Arnold continued, at least you won the Mr. Universe twice. You can’t have it all.

The psych out games continued as the Over 200 Pound competitors are pumping up backstage before the contest begins. Arnold is in complete control of the situation as he admonishes Lou for making too much noise as he is pumping up. The competitors then share a laugh as Lou continues to loudly grunt while doing his pumping up exercises.

Onstage, Arnold and Lou are joined by bodybuilding legend Serge Nubret. In the posedown, Arnold shows his vast bodybuilding experience as he poses faster and more precise than Ferrigno. When the posedown is completed, the competitors stand onstage waiting for the decision. Arnold leans over and whispers something into Lou’s ear before Lou is announced in third place. Arnold wins the contest once again, appearing as the inevitable winner. 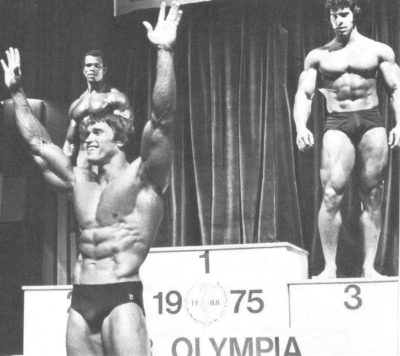 When the movie was released in January of 1977, the critics were fascinated by the dramatic differences between Arnold and Lou, the cocky winner versus the insecure underdog. Instead of looking like a loser, the audience and the critics related to Lou’s situation and showed empathy towards him. Arnold, of course, was praised for his onstage charisma and confidence.

Over 40 years later, the bodybuilding fans still remember the celebrated rivalry between Arnold Schwarzenegger and Lou Ferrigno. The movie “Pumping Iron” is the most famous movie about bodybuilding and is now a cult classic. Of course, Arnold went on to have an incredibly successful movie career before being elected as the Governor of California for six years. 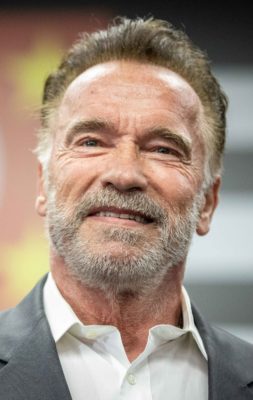 Lou landed a starring role as the Incredible Hulk in the TV series of the same name.