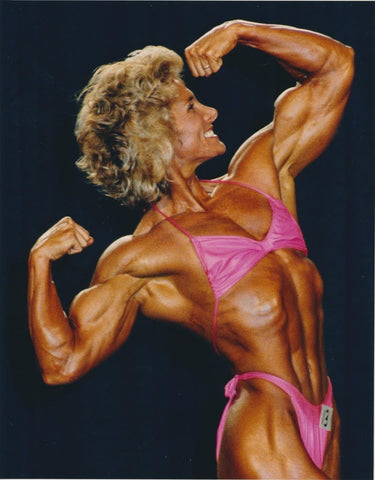 “Bev Coming To Bodybuilding Was A Game Changer.”

Bev Francis was introduced to the bodybuilding world in 1985 and featured in the movie Pumping Iron II. Bev was a successful and celebrated athlete, a champion powerlifter, and a national shot-put champion.

She also had more muscle and was stronger than the other female bodybuilders of the period.  But to understand why she was such a disruption in the sport, you have to look at the history of bodybuilding for women up to that point.

[When Bev Francis first appeared on the scene in PUMPING IRON II, she had the body of a champion powerlifter.  After a few years of bodybuilding training, her physique was more symmetrical and aesthetic.]

The first contests for modern female bodybuilding, according to IFBB women’s archivist/historian Steve Wennerstrom, began in 1977. But the competitors back then had not been training long or seriously enough to have developed much muscle.  In those days, it was mostly a matter of women dieting hard enough to get very lean.  Right up through the first Ms. Olympia in 1980, these were basically dieting contests.  In the beginning, in many cases, the women were discouraged from hitting bodybuilding poses, and in some, they were required to wear high heels, like in a beauty pageant.

Now, we understand nowadays that it takes many years of serious workouts to create what we recognize as a realbodybuilding physique.  For example, it took decades for men’s bodybuilding to see physiques on stage like Steve Reeves or Bill Pearl in the 1950s or Arnold or Sergio Oliva in the 1960s.

Actual sports, rather than skills like billiards or throwing darts, are progressive by definition.  The athletes of today are always better than those of the past.  So, the earliest female bodybuilders did not have much muscle, but as more women got involved, trained for more years, and set higher goals for themselves, by the early 1980s women bodybuilders on stage began showing more and more mass muscle and muscularity.

But not a whole lot more.  This kind of evolution takes time.  And one problem in those early days was that the federations and the judges tended to react negatively if a woman bodybuilder displayed more muscle than the given standard of the day. As Pumping Iron author Charles Gaines has observed, women who develop their muscles for primarily aesthetic purposes are a new archetype, something never before seen at any time or place in history. How they looked represented a challenge to popular ideas on femininity, morphology, and sexual and gender identity.  So much of the culture disapproved of these women as they began to develop more muscle and, of course, federation officials and judges are part of the culture.

[This kind of photo helped convince her critics as to the aesthetic qualities of Bev Francis’ physique.]

In the 1980s, Rachel McLish started off the decade by winning the first Ms. Olympia.  Rachel was lean, elegant, and beautiful, so was a great example being the first famous woman bodybuilder to introduce the sport to the world.

Then Rachel was followed a few years later by Cory Everson. Cory was tall, 5’9”, and had a physique developed by years of athletic competition as a heptathlete.  Cory had lots of very aesthetic muscle, but not the degree of muscularity that would soon characterize female bodybuilders like Lenda Murray.  Cory won the Ms. Olympia title six years in a row, starting in 1984, and her body and good looks helped her to find success on television and in several movies.  Because of this, during that period of the late 1980s, Cory WAS the face of female bodybuilding as far as the public was concerned.

It was in this context that Bev Francis came on the scene.  With the body of a powerlifter, including a lot of muscle, Bev only trained as a bodybuilder for a few months leading up to the filming of Pumping Iron II.  So, her physique did not have the aesthetics that we associate with bodybuilding.  This presented contest judges with a dilemma.  Bev on stage next to somebody with so much less muscle, like Rachel McLish, was very much a matter of apples versus oranges.  The judges had never seen a woman on stage with this much solid muscle.  So, there wasn’t really much precedent for making a judgment like this.  This was totally new territory.

[Even from the beginning of her bodybuilding career, Bev Francis was capable and confident when it came to posing.]

If you watch the movie, you’ll see that Bev finished eighth in the contest.  This was controversial in part because a lot of advocates of bodybuilding for women thought Bev was being subjected to the same kind of rejection for having so much muscle as has happened to other competitors like Laura Combes or Kay Baxter.  But this was not really true.  A good way of demonstrating this is by comparing Bev’s physique in 1985 withhow she looked winning the 1987 IFBB World Championship, defeating the amazing Anja Langer.  After several years of actual bodybuilding training, Bev showed much better symmetry and proportion, a small waist, and great conditioning. In other words, an ACTUAL bodybuilding physique. With these vast improvements in physique, Bev also overwhelmed Anja with the quality and dynamism of her presentation.  Anja seemed hesitant on stage, while Bev radiated energy and confidence.

Bev Francis was the first to present impressive size and definition to the competitive stage. She paved the way for those to come like Lenda Murray, Kim Chizevsky, Yaxeni Oriquen,and Iris Kyle in the ’90s, and to our present champions, Andrea Shaw, Helle Trevino, and Margie Martin. Women with lots of aesthetic muscle and muscularity have become the norm and standard in the industry. It may be hard for younger fans to appreciate the degree to which Bev Francis was a disrupter in those early years, but she definitely was.