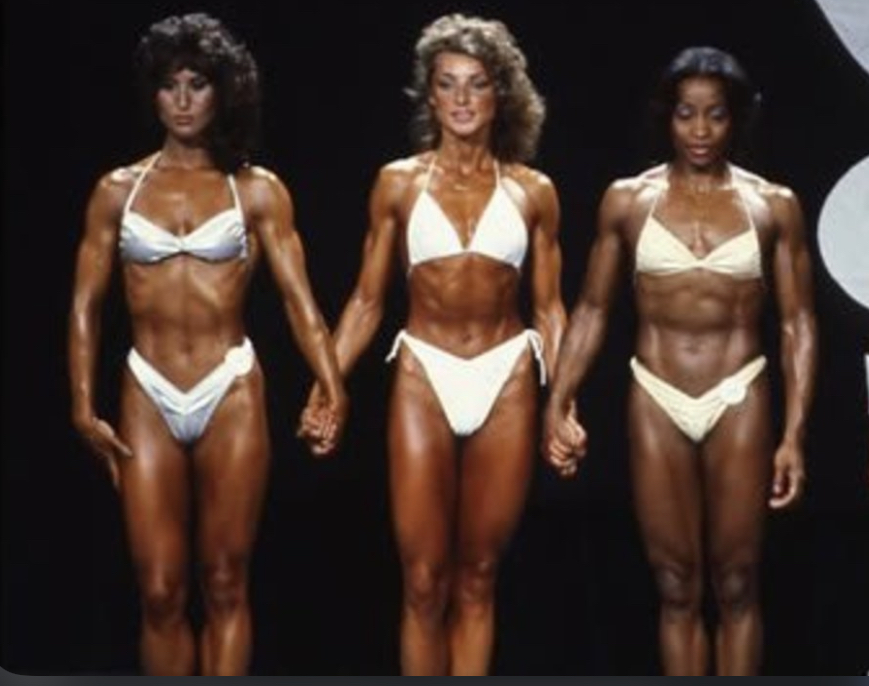 The first ever Ms. Olympia Winner in 1980 was the beautiful Rachel McLish. Rachel would go onto win one more of these titles in 82’ en route to gracing more magazine covers than any female bodybuilder over the next 5 years as she’d retire from competing in 1984.

In 1981, the Finnish bodybuilder, Ritva “Kike” Elomaa become what seemed to be “the standard” in women’s bodybuilding by winning the Ms. Olympia Title but it would be short lived. Kike had a brief Pro career of only 3 years but in that time she’d cement herself as Finland’s greatest female bodybuilder of her time!

On 1983, Carla Dunlap would present yet another complete contrast to what Rachel presented as the premier physique on the planet however, she managed to beat the popular and photographic champion in head to head competition establishing the fact that the defending champion could be defeated and the look of Ms. Olympia as a standard, was evolving.

The early years of the Ms. Olympia competition in the 1980’s saw a transition of ownership of the title change hands 4 times between 3 women; Rachel, Kike and Carla.

Cory came from an athletic background in Track and Field by way of Wisconsin. She was bigger than the three previous winners of the Ms. Olympia standing 5’9 and competing on stage at roughly 145-47lbs. This former North American champion would arrive on the Olympia scene and rattle off six consecutive years to close out the decade as the greatest Ms. Olympia the sport has ever seen!

When Cory retired in 1989 she never looked back and never competed again. Succeeding the retired future Hall of Famer would be the sports next greatest female icon in the form of Michigan’s, Lenda Murray.

Lenda would go on to sweep 6 straight Ms. Olympia titles tying her with Cory’s previous 6 consecutive victories in the second half of the 80’s decade, essentially denying any real change in regards to the look or promotion of the sport half way thru the 90’s with the package Lenda was presenting. Along the way, the establishment was challenged with varying “looks” to throw at the dominate victors in the form of the beautiful, Gladys Portugues, the muscular Bev Francis, complete beauty from Germany, Anja Langer and the All American, Tonya Knight to name a few.

After Lenda ran successfully through six straight years of being recognized as the sports most dominant female athlete in concert with Lee Haney’s retirement from winning on the Mens side of the Mr. Olympia with 8 consecutive victories, fans were wondering how many more titles can she win? By 1996 we got our answer. Lenda would be out conditioned by arguably the sports “driest” female Ms. Olympia winner the sport had ever seen in the form of upset winner, Kim Chizevsky. Kim would go onto win the tile for the next 3 consecutive years.

As we ushered in a new century in the year 2000, the look of Ms. Olympia would vary from Hollands, Juliette Bergmann, England’s Andrulla Blanchette, Canada’s Dayana Cadaeu, Ukraines, Valentina Chepiga.
That said, Lenda Murray would come out of retirement in the new millennium to regain two more Ms. Olympia Titles in 2002 and 03’ giving her supreme reign with a total of 8 Olympia Titles!

Follow Lenda’s dominance in 2004, California’s Iris Kyle who would become the Olympia’s most decorated champion of all-time with 10 Championships to her credit, a record that still stand today!

The Ms. Olympia competition disappeared from the landscape of the bodybuilding world in 2015 for various reasons however, it and would soon be resurrected by Olympia CEO, Jake Wood in 2020 to a resounding reception in Las Vegas where we saw the show give birth to what many pundits consider, the newest dominate future hall of fame and potentially the sports greatest Ms. Olympia in the form of the reigning and 2X defending champion, Andrea Shaw!

Andrea has dominated not only the sports premier Women’s Bodybuilding contest in the form of Ms. Olympia but the sports number two show, Wings of Strength World Championships which Andrea has also won the past two consecutive years running away! Is this a re-run of what Iris Kyle accomplished a decade ago? Are we witnessing History on the making?
This December would mark a 3rd consecutive title for the champion should she decided to compete in both the World Championship and the Ms Olympia barring injury or blunder. Andrea is the sports most promising and yet dominating Star with little to no challengers coming up the ranks to rival her overall package.

Heading into this years Ms. Olympia this December there has been zero indication that Andrea will not continue her dominance in the race to a record breaking 11 Ms. Olympia Titles which she is currently on record as stating she’d like to challenge!
Andrea has no lagging body parts nor rivals by her challengers to warrant any real concern other than bodybuilding burn-out which can occur in the grand scheme of things. Without a real challenge, how long will Andrea be interested in pursuing this record? Where is her next great challenge going to come from? Who is primed for victory over Andrea? Is womens bodybuilding going to be in jeopardy again if no one can present a real challenge to the champion?

Are we looking at the worlds greatest Ms. Olympia ever come this December?

This is one contest you don’t want to miss!
Ticket Information can be found on the official website: