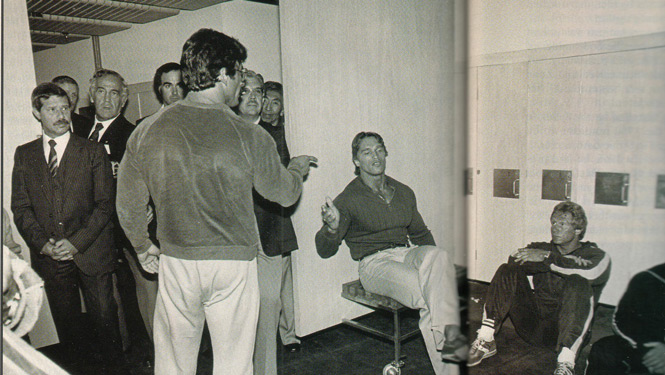 The 1980 Mr. Olympia contest staged in Sydney, Australia, remains by far the most controversial in the event’s history. The contention centered on the participation of Arnold Schwarzenegger, who had announced his retirement from competition in 1975 after winning six consecutive Mr. Olympia titles. Seemingly only in Sydney to do commentary for CBS TV, Arnold stunned the bodybuilding world by, on the morning of the contest, declaring that he was returning to competition in pursuit of a seventh title. This set off a chain of events that culminated in Mike Mentzer and Arnold seemingly set to resort to fisticuffs as illustrated by the attached photo which has become somewhat iconic.

Boyer Coe, who was destined for fourth place, was one of the first to hear about Arnold’s participation when Bill Pearl (three-time NABBA Pro Mr. Universe, who withdrew from being head judge) called him in his hotel room and said, “I just want to let you know that Arnold is gonna enter the contest.” Pearl also added that Arnold wanted the competition to be run under the format of two classes: under 200 pounds and over 200 pound, with the two class winners posing off for the title. The contest had been conducted along those lines from 1974 through 1979. But after the ’79 Olympia it was decided to go back to just an open class as the situation could occur where the second placed guy in the lighter class may be better than the winner of the heavy class and vice-versa.

Arnold duly showed up at the competitors meeting held prior to the contest cognizant of the fact that the 15 original entrants had previously signed a petition asking that the two weight classes be abolished and that the Olympia should henceforth be contested as one open class.

In a 1993 interview this is how Mike Mentzer told me about that pre-contest meeting.

“There were maybe 50 people at the competitors meeting and, as usual, Arnold wanted to be the center of attention. In every situation, he tries to be the standout, and on this occasion, he was the only athlete of the 16 in the contest who wanted to keep the two weight classes.

“He said something to denigrate Samir Bannout that I thought was uncalled for. I passed on that, feeling Samir should have defended himself. As the debate progressed, there was a lot of arguing between Arnold and some of the guys. I wasn’t really concerned one way or the other – I thought I could win anyway. Then Boyer Coe stood up and, as the gentleman he is, said, ‘Why don’t we let Arnold explain to us right here and now his exact reasons for wanting to have two weight classes?’

“Arnold barked, ‘Boyer, let’s talk like adults here.’ That really irked me, because Boyer made his plea with no hint of malice. In addition, this was the IFBB’s event, but here was this big Prussian son of a bitch standing there and trying to walk all over us. I interjected and asked Arnold why he was so reluctant to see the open class introduced.

“For some reason, that question pissed him off. He seemed like a guy out of control as he turned to face me, his upper lip curled around like a snarling animal. We were debating the issue of weight classes, but Arnold chose to snap at me, ‘Mike Mentzer, we all know Zane beat you last year because you have a big stomach!’

“I was seated 20 feet away from Arnold, who was standing holding court, and I perhaps allowed that comment to irritate me too much, as on impulse, I bolted toward him. As I approached him, I decided I wouldn’t hit him, but nevertheless I was surprised when Arnold sat down as I continued to berate him. Wagging my finger at him, I told him, ‘Look, Arnold, Boyer Coe said what he did as a gentleman – he didn’t deserve that response. You’re the one who’s acting like a baby, literally! Arnold couldn’t look me in the eye.”

Not for the first time in the history of bodybuilding, Joe Weider stepped in and defused the situation. He advised Arnold to accept the voices of the other 15. The debate ended as Arnold proclaimed, “I withdraw my objection.”

Regarded as one of the most prolific journalists in bodybuilding history, Peter McGough has built a reputation as a wordsmith, a historian and a master storyteller.  Digital Muscle is proud to feature the work of one of bodybuilding’s most celebrated writers.