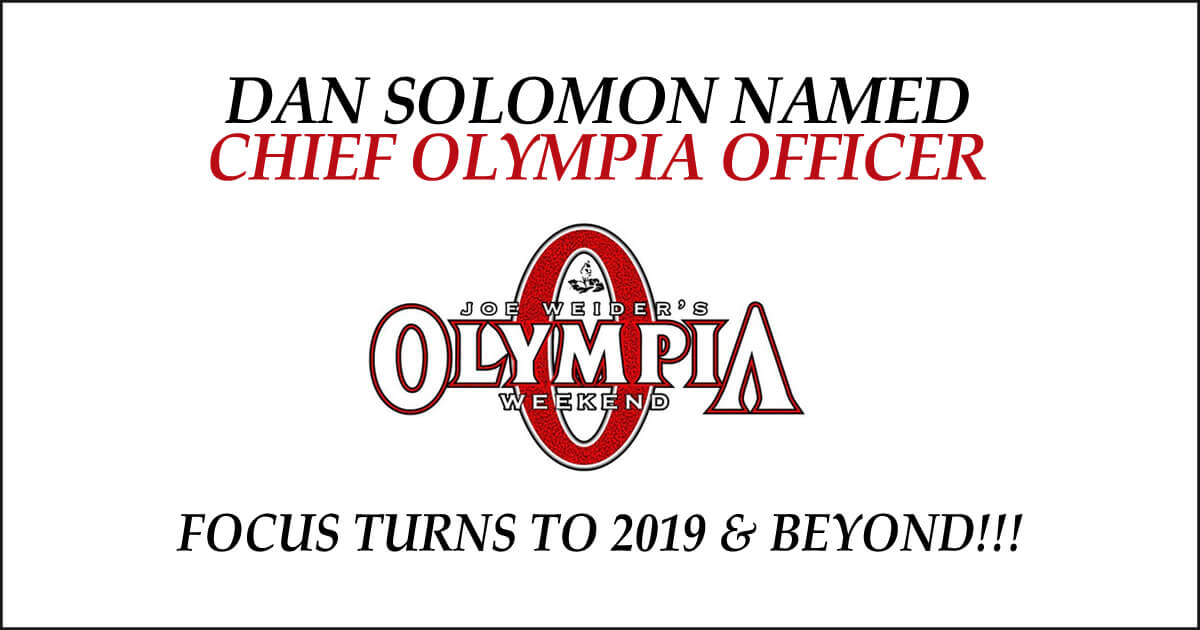 “As we continue to grow the many opportunities surrounding the Olympia, Dan is the perfect choice to take the brand to new heights,” said AMI Chairman and CEO David J. Pecker. “His vision and understanding of the global fitness community will ensure that the Olympia Fitness & Performance Weekend remains the sports premier event and an unrivaled experience for competitors, fans and our sponsors.”

A long-time fitness industry insider, Solomon has garnered recognition for his wide reaching contributions as a producer, commentator, editor, writer, publisher, and most recently as co-executive producer of the recent motion picture BIGGER, the largest budgeted bodybuilding themed production of all time.

“For more than a half century, the Olympia has been the flagship brand in the world of bodybuilding and fitness,” said Mr. Solomon. I have watched closely as it has grown in every measurable way, but there are still untapped opportunities for expansion and innovation, while creating a heightened experience for sponsors, exhibitors and fans. The chance to serve as the Olympia’s chief officer while joining one of the world’s premier media companies is the opportunity of a lifetime.”

“This is the perfect time to add a creative and talented executive like Dan to our team as we build on the incredible momentum of 2018’s historic event,” said Mr. Scardino. “AMI is committed to the continued growth of this event and to providing our fans, sponsors and exhibitors a bigger, better, and more exciting Olympia every year. Dan brings a unique blend of expertise, knowledge and leadership to help make that happen.”

Robin Chang, the industry’s most experienced bodybuilding executive, will continue as Executive Producer of the 2019 Mr. Olympia event.

AMI has been an owner of the Mr. Olympia event for the past 15 years, working with the most knowledgeable executive in professional bodybuilding today, Jim Manion, who has single handedly created the IFBB professional contest worldwide. Mr. Manion and Mr. Pecker have collaborated to expand the Olympia contest into the fitness and performance weekend which attracted more than 60,000 people in 2018. This year, AMI introduced the first-ever “People’s Champion” allowing fans to cast a vote in selecting the winner of the Mr. Olympia contest. The 2018 contest was once again the richest in the sports history offering both male and female competitors the sport’s largest purse.