New Fitness Olympia Champ Whitney Jones: Was it All Just a Dream? 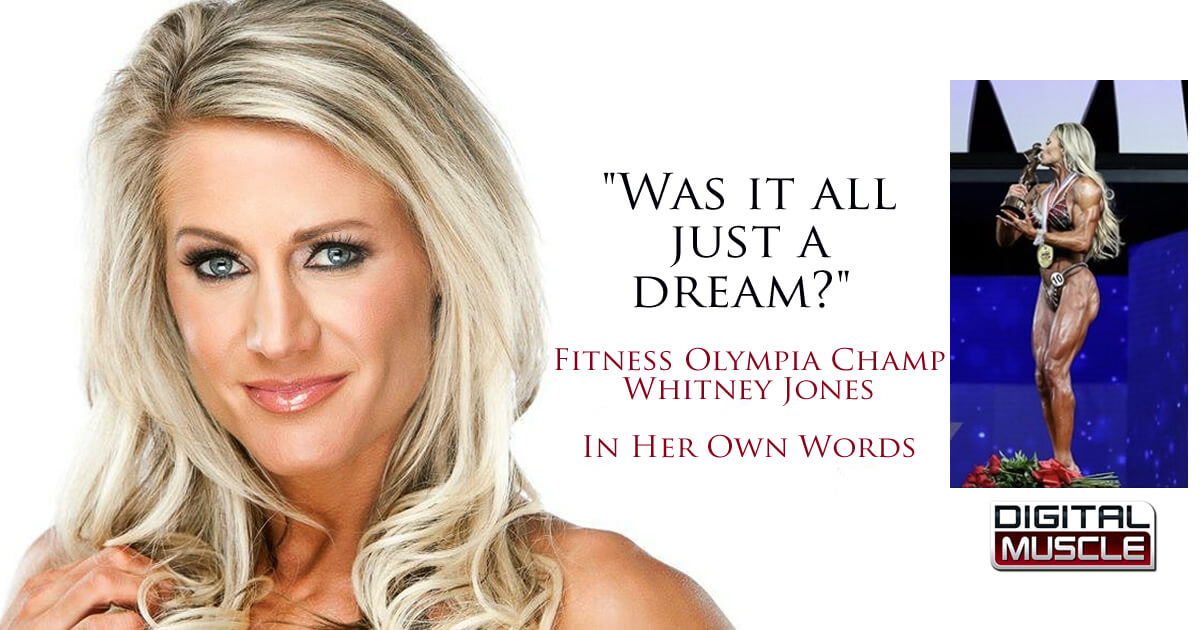 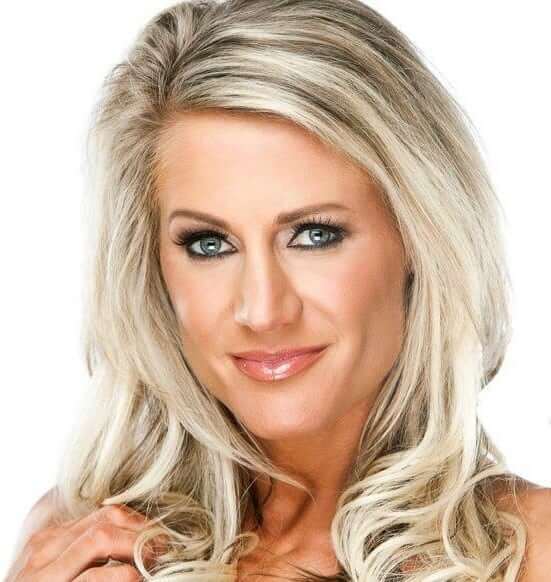 It was 2012, Olympia weekend, and I was walking into the Orleans Arena to watch the finals. I felt the energy and buzz from the lights and music and thought to myself “how epic would it be to step on the Olympia stage one day.” Those “what if” moments can be powerful, and everything changed from then on. Through the years the goals increased from qualifying for the Olympia, to placing top five and then pushing for the ultimate title.

Having goals is the initial stage, but laying out a realistic plan to get there while balancing everything on your plate is the tricky part. I’m a single mom with two very active boys. I own Pro Physiques, the largest personal training gym in Arizona with Damian Segovia. We have a large prep team with clients all over the world and travel year round to be at shows for them. And I launched two additional businesses in the last couple years; my clothing line FEARless by Whitney Jones and The Glute Pros, which manufactures fitness equipment. But all the while I never lost sight of my progressive Olympia goals to make it to the very top.

Through the years I was thrown many curve balls, testing my will to succeed, my mental fortitude and my strength to see how many times I could get back up when knocked down. Many of these setbacks were due to injuries, which are very common in our division. In my first few years as a pro, I had rotator cuff shoulder surgery, broken ribs, fractured collar bone, broken wrist, hand and arm, MCL knee surgery, back injury, stress fractures in forearms and several other minor injuries but I never gave up. My daredevil ways resulted in a lot of unfortunate injuries, but I always bounced back and got right back at it. I wanted to show my boys, my clients, and others who followed my journey to not let setbacks derail them from their goals. I wanted to provide inspiration to others who needed hope when they experienced their own setback.

In 2016 I had finally achieved my goal of placing on the Olympia stage, but during the 2017 season I suffered a neck injury. Everyone considered this to be the end of my fitness career. Returning to the stage after undergoing a 2-level ACDF spinal fusion with a metal cage surgically implanted to stabilize my neck had never been done before. It was June of 2017 and the morning of surgery I set a goal to be back on stage at the Arnold Classic in March 2018. My countdown clock was set for 276 days out. I wanted to prove to the doubters that anything was possible. And with a goal, focus and a positive mindset I knew I could achieve it.

Fast forward to February 2018 as I was 8 months post neck surgery and just weeks out from the Arnold classic. I was feeling great and my neurosurgeon was in disbelief at what I had accomplished with my recovery and there was a lot of buzz about my comeback and return to the stage. Then the unfortunate happened. During a standard routine practice I misjudged my flip, landed wrong, and down I went. I heard a pop and sure enough as an MRI would soon show I completely ruptured my ACL.

My ortho surgeon said if I was to continue competing then surgery was the only option. I was devastated as the reality set in, but thankfully I don’t stay in dark places too long. Within a few hours my mindset shifted and I had a new plan in place and that was to still compete. I worked too hard to rehab from my neck injury to throw in the towel this close to show. But with only a few weeks to prepare, how the hell was I going to pull of a routine when almost every skill I do requires two functioning legs? In this moment I knew this was where my true talents would shine. I had to think out of the box, create a performance that was impressive and explosive, throw in unconventional tricks and hide the fact that I was performing with only one leg. I kept the ACL injury a secret and kept my head down just grinding until show day. Besides people were focused on me coming back from neck surgery so my hope was they wouldn’t notice the knee.

The Arnold was epic, I successfully posed in my heels without falling over and performed my heart out with my new one-legged routine and wowed the judges. I walked away with the title of Ms. Fitness International and was in complete awe. During my on stage interview with Arnold he asked about the knee brace I wore during my routine, so I shared the news of my ACL rupture and that I was scheduled for surgery the day I flew home from Ohio. Plans had already been in place to have surgery immediately because the Olympia was just over 6 months away and I was already focused on my next goal.

Truthfully I was still recovering from neck surgery at that point as it had only been 9 months and now would also be recovering from ACL reconstruction surgery. But our minds are powerful things. When I go all in, I am unstoppable. There was never a question that I wouldn’t be ready for Olympia. Yes many, many people said it was impossible, that I’d never bring the same energy and explosiveness, and my physique would be off because of the atrophy and many other criticism that just fueled my fire. I rehabbed at Fischer Institute with NFL players recovering from the same surgery and went hard everyday, sometimes up to 4 hours. It was intense and brutal but this Olympia was wide open for a new champ to be crowned and I wanted my shot. 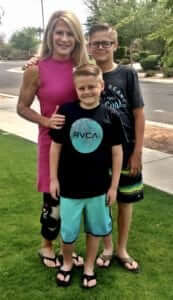 As a Mom of two boys I always want to set an example for them of rising from adversity, never giving up even when your goals seem far out of reach and showing them that anything worthwhile will never come easy and if you want it you must find a way to make it happen. My boys have seen me battle injuries over the years but what we went through together this past year taught us all so many lessons and they’ve been by my side every step of the way. Rather than watching the webcast from home like past Olympia’s, this year they wanted to be there live in person. As my youngest said, “This year is going to be different Mom” They were in awe to see the floods of people at the Meet the Olympians fan gathering.

For my routine I was able to put back in a few of the skills I had to scratch when I could only do a one-legged routine, but sadly not all of them, but that was ok. I still had to wear a knee brace when I performed, but when I finished my routine I was thrilled with what I delivered on that stage and apparently was so caught up in the moment with pure happiness that I popped up, gave my knee a huge kiss and walked off the stage beaming with pride. It wasn’t long before they had us all back on stage for awards and the moment of truth. As I scanned the crowd looking for the faces of my two precious boys they began announcing the placings. Third place, second place and then…. the new Ms. Fitness Olympia, Whitney Jones!

Is this real, did that just really happen? Did my dream really just come to fruition? It was one hell of a year overcoming neck surgery, then ACL surgery, taking the title of Ms. Fitness International and then Ms. Fitness Olympia and becoming the first ever Olympia champ who also holds the title of mom. These are huge accomplishments for me which I hope will inspire others to realize anything is possible. The winning moment was seeing my boys running towards me, arms open with tears in their eyes and hearing them say “I knew you could do it” As this all sinks in and I reflect back on how crazy the journey has been, I can’t help but wonder if it was all just a dream.