Backstage at the Arnold (Digital Muscle Has its Privileges)

I finally got backstage at the Arnold Schwarzenegger Classic Men’s World Pro Bodybuilding Championship, which was the original name of the legendary competition held annually in Columbus, Ohio, along with a growing slate of physique contests and a slew of competitions, too numerous to mention and too wide to imagine. Art at the Arnold—you can’t miss it as you approach the long, wide Columbus Convention Center corridor that leads to the escalator that takes you down, down, down into the sea of people navigating their way outside the doors to the expo.

My relationship to the Governor is that of fly on the wall to center of the universe. I’ve never actually met him, although I’ve been in the room with him—and up close—many times over the years, and once at the back entrance to Columbus’s old Veterans Memorial Auditorium I was almost trampled by his bodyguards (One minute we were talking; the next, my boss, John Balik, was urging me to go flat against the wall, pronto, as the Big Fella, surrounded by a small army of big guys in uniforms, marched past).

At least that’s how it looms in my memory. The point is that back before Arnold became my governor, a “press pass” got you into the wings off stage right, where athletes, officials, photographers, et al., would be milling, and a small interview area would be set up for the official coverage team. Arnold would be there, waiting to go onstage as the final winner was announced, while the backstage crowd, having grown exponentially as the big moment drew near, watched the action on a hanging monitor.

I could go on and on, but the point is that once Arnold became Governor Schwarzenegger, his protection became the responsibility of the State of California (CHIPs, anyone?), and everything changed. There were exceptions, but for the most part the front-line media personnel were no longer allowed in the wings, and the rules didn’t change after the Governator left office.

Not that the media weren’t treated spectacularly. Especially, working for Iron Man, with Mr. Balik’s longtime friendships with Arnold and Jim Lorimer, I’ve had some of my best experiences covering the huge hullabaloo in Columbus. When the wings became off-limits, the backstage crowd converged upstairs in the Brehm Room, a small hall with a stage at one end that served as the pump-up room, and now, at the new Battelle Grand at the convention center, the working press have a large offstage area with tables, electricity, WiFi and monitors. Beyond that, though, there’s a backstage spot near the wings, where the backdrop and lights are set for the preshow and interviews, where Arnold comes through—with a much more casual entourage—on his way to the stage to interview the winners, and everyone lingering stops to watch. Everyone who has the cool credentials that get you back there, that is. I confess, I missed it.

So imagine my wide-eyed delight at getting to be on the actual official DigitalMuscle.com Webcast this year, standing under the lights with my mic during the preshows and wrapups, commentating on all the “non-bodybuilding” pro events, and lurking like a fly in the wall as Digital Muscle’s Dan Solomon and Ben Pakulski interviewed Arnold. With a cast that also included Chad Nicholls, plus my old friend Dave Palumbo, my new friend Traci Lynn Cowan, Tad “the Diet Coach” Inoue and two-time men’s physique Olympia champ Jeremy Buendia, the show was lively—and went by in a flash—or maybe that was just the adrenaline coursing through me. 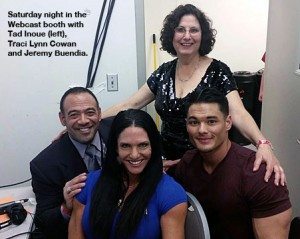 Here’s a quick rundown of the events Traci Lynn and I covered.

The women’s competitions were all top notch. The open-call lineup of 49 contenders at the Women’s Physique International produced a terrific crop of finalists who performed at the evening show. It also produced a new champ, the symmetrically muscular Autumn Swanson, who may have the stuff to pose a serious challenge to Julianna Malacarne come Olympia time.

The Bikini International brought an upset of expectations, with ’13 winner India Paulina bouncing to her second title; preshow favorite Janet Layug having to settle for third place, again; and glute goddess Justine Munro doing likewise in the runner-up spot.

The Figure International pitted defending champ Camala Rodriguez-McClure against Olympia winner Latorya Watts. Camala looked great, but there was nothing she could do, as the fabulously X-framed Watts took over the title with a unanimous win.

Fitness was all Oksana—no surprises there—with the sleek Russian diva giving the Grishina touch to a Michael Jackson–themed routine. The surprise came from Whitney Jones, whose solid and balanced physique propelled her to the runner-up slot at this prestigious event.

The Men’s Physique International also culled a talented top 10 from a much larger selection, in this case 38. For those who were listening to our commentary, it just goes to show how far astray you can go in trying to interpret the callouts. That said, Brandon Hendrickson was a worthy winner, and we were tremendously impressed with runner-up George Brown.