Supplement Commentary: The Future of the Pre-Workout 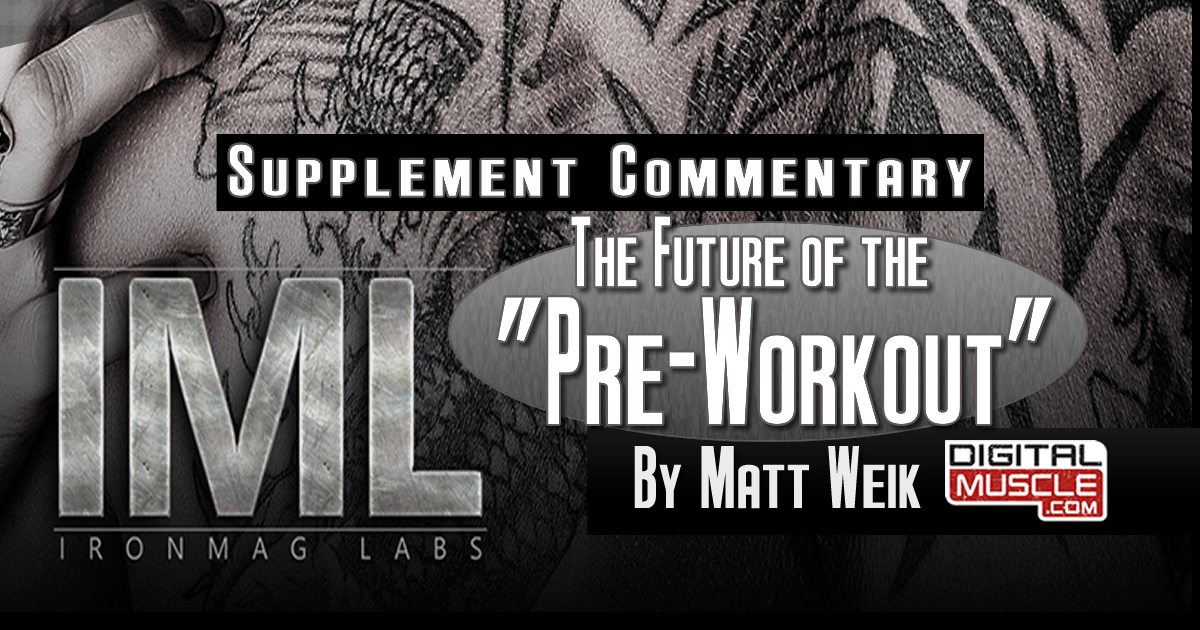 We live in a world where people who use pre-workouts are focused only on one thing — stimulants.  That’s right, they want to feel jacked up.  They want to feel as if ants are crawling under their skin, that tingly sensation telling them their pre-workout product is working.  If they don’t feel it, it’s not working—right?  This mentality is what’s going to get people in a lot of trouble.  Let me explain.

When you are addicted to something, you crave it, you need it. And after using something for so long, the effects at the same dosage no longer give you the same feeling.  It’s no different with pre-workouts.  You start taking a product that has 200mg of caffeine in it.  Then all of a sudden after using the product for a while, you no longer feel the energy from that 200mg of caffeine so you up the dose. Rather than taking one scoop, now it’s two scoops….and then three and so on.  Eventually it will get to the point where your adrenals are so fatigued that you’re taking 1g or more of a product to get that same feeling.  Similar to a high that drug addicts look for.

This can cause serious health risks. And let’s be honest here, have you spoken to your doctor about the supplements you take?  My guess would be no.  There’s a chance you have an underlying health condition that hasn’t come to the surface, exposing you to great danger with unsupervised use of high dosed stimulants. This could have grave consequences on some.

Years ago, everything I said above was a spitting image of me. I worked for MET-Rx and I pushed the limits in terms of stimulants and I wanted to see what effects high dosages would have on my body.  I was able to get to around 1g before I really felt anything from the products.  At the time, we had an energy shot called the MET-Rx Amplified Shooter.  It was packaged in one of those test tube looking containers where the lid would unscrew and you could slam it down.  Each one of those was 2.9 ounces of fluid and contained 200mg of caffeine along with synephrine, taurine, tyrosine, and other ingredients.  At a trade show I slammed five bottles at once.  Needless to say, I wasn’t feeling too great a little while later.  This was ultimately the point where I asked myself, “What am I doing?”

What was my reasoning for taking these types of products? Energy?  Or to get a pump in the gym?  I think most people these days’ battle with that very question.  They want the added energy in the gym, but they want to feel that skin-tearing pump.  For me, I was completely exhausting my adrenals to the point where I wasn’t getting anything from my pre-workouts when it came to energy.  Around that same time is when I realized I wasn’t getting the pump I desired either.  I knew something had to change.

The Future of the Pre-Workout Category

From my experience I truly feel that there are thousands of lifters out there going through the same thing I mentioned in the previous paragraph. They are losing the effects from their pre-workout and basically tossing money down the drain by having to almost overdose in order to feel the simulants in a given product.  For that reason, I think the industry will soon head in a new direction.  While we aren’t there just yet, here’s what I see for the future of the pre-workout category.

Nootropics.  While I think some products might still have some energy components to them (while very little in comparison to today’s standards), I believe most will be heavy on nootropics, giving the user a great mind-muscle connection, mental clarity, and razor sharp focus.  There will also be pump properties in the product and maybe even some B vitamins.  This will allow the lifter to truly focus in on the feel of each contraction, feeling the muscle tighten and activating all of the muscle fibers to promote strength and muscle growth.

Definition of Nootropic: a supplement or drug used to enhance memory or other cognitive function.

Some lifters have no issue feeling each rep even when using high-dosed stimulants. However, there are many out there who because they feel so jacked up from all the stimulants, they are only focused on lifting heavy which might not necessarily put all the stress on the muscle group they are trying to work due to poor form or using accessory muscles to help in the movement.  This sense of invincibility can ultimately lead to injury.

The world of nootropics isn’t just for gym-goers. Nootropics can play a beneficial role in athletics as well when focus and concentration are necessary to perform at a high level.  While professional organizations wouldn’t have any issue with such products, the NCAA might be singing a different song.  While college athletes have the ability to go out and purchase whatever they want (as long as they don’t fail a drug test), schools would not be able to purchase nootropics for athletes as they would be considered impermissible.  None the less, athletes, regardless of what sport, would benefit from nootropics.

Finding yourself in a fog at work? Maybe you’re not as productive today because you’re finding it hard to concentrate.  Or maybe it’s 2pm and you’re in that part of the work day where you’re just ready for 5pm so you can punch out and go home?  Taking a nootropic will help you lift that fog and help you become more productive to complete those projects late in the afternoon and have you going home after work feeling like you accomplished a lot.

Nootropics can help with so many things that it’s hard for me to believe that they aren’t the future of our industry, and I expect to see them right at the heart of the pre-workout category in years to come.

Get more useful supplement insight at the new Supplement Blog here at DigitalMuscle.com