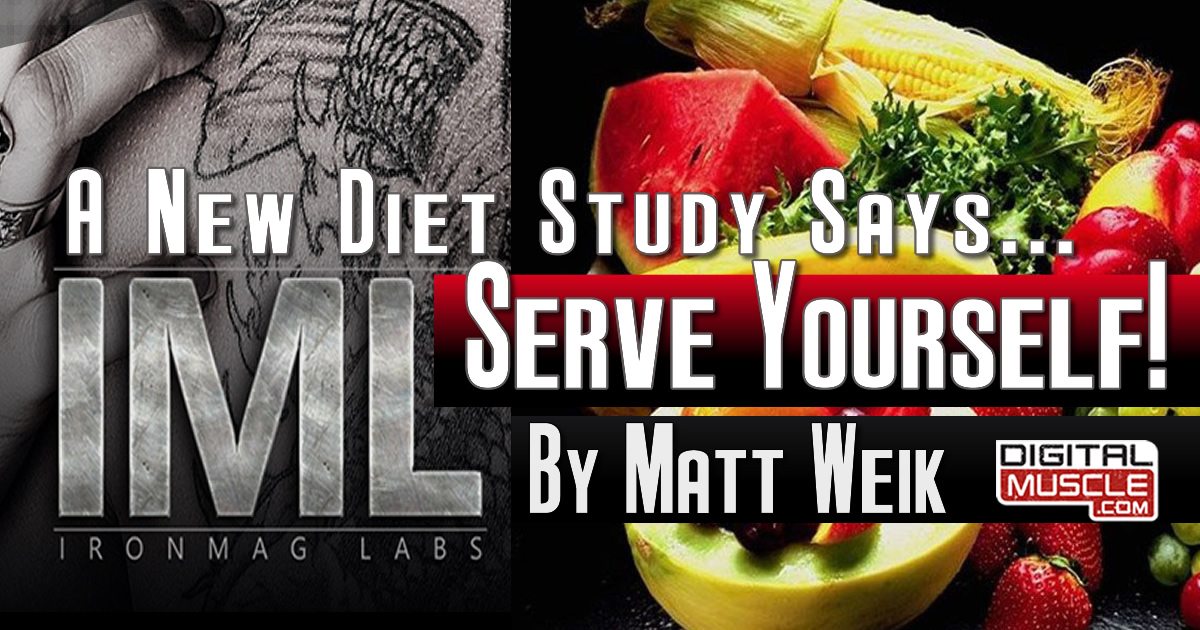 If you’re looking to stay on your diet, the worst thing you can do is have an enabler feeding you food that you shouldn’t be consuming.  Or someone who leaves out portioned snacks for easy consumption.  You almost feel bad not eating it, right?

New research says, feed yourself to keep your waistline in check.

What exactly does that mean?

When you serve yourself, more times than not, you’re likely to serve yourself a smaller portion than if someone put the exact same food on a plate for you. For instance, that piece of pie someone sliced for you is probably bigger than the one you would have sliced for yourself.  Now, I’m not saying that by having to serve yourself you wouldn’t eat that unhealthy food choice —but rather if it’s there in front of you, you’re more inclined to eat it.  Make sense?

When researchers looked at eating habits of two different groups, they found that, “If they’re served by someone else, they can outsource responsibility to someone else. But if they serve themselves, they have to accept responsibility and that makes them feel bad.”  It’s easy for us to say we ate something because someone gave it to us.  You’re at a family gathering and your Mom made her amazing apple pie and cut you a nice big piece… how could you say no?  Right?  Begrudgingly you eat it.  “But Mom cut it for me and I didn’t want to say no and hurt her feelings.”  Sound familiar?

We redirect the blame of consuming that unhealthy food choice because we don’t want to take responsibility for getting it ourselves and have to look in the mirror and explain why you just ate half the apple pie yourself when you know that’s not part of your diet.  When someone gets their own portion, or eats something not on their diet, they have no one to blame but themselves.

A Cruel, but Interesting Study

Researchers from the University of Southern California conducted five different studies with around 800 subjects. In one particular study involving 189 subjects, a sign was placed in a room that read: “Have yourself a little snack.”  That’s pretty much the kiss of death to people who can’t control their eating habits.

The scenario was set up with two different snack items. One snack item was Reese’s Pieces, and the other dried fruit.  I’m sure you can figure out which was considered the unhealthy and healthy option.  Individual cups were placed on the table with Reese’s Pieces in the cups.  The researchers found that 32% of the subjects picked up the cup and ate the entire contents.  They then repeated the scenario, but rather this time they had a large bowl full of Reese’s Pieces with individual serving sized cups to the side of the bowl and a spoon where the subjects could help themselves.  In this instance, none of the 46 subjects in that group ate the Reese’s Pieces when they were forced to make a conscious decision to scoop out their own portion of the “unhealthy” snack to eat.  They’re lucky I wasn’t in that group… I would have ruined everything!

Then the researchers conducted the same scenarios, only this time with the dried fruit. For the scenario where the students found the sign with the dried fruit already portioned out in the cups, 16.3% indulged in the snack.  When another group was put in the other scenario where they had to serve themselves from a large bowl of dried fruit and scoop it out themselves, 6.4% helped themselves.  An interesting find when compared to the Reese’s Pieces group that when given the opportunity to help themselves, no one partook.

So, what is this showing? When people have to make a conscious decision on whether they should eat something, if an item is already prepared for them to consume they were more likely to pick it up to eat.  When left to decide if they wanted to eat the healthy or unhealthy snack items, more people decided to help themselves to the healthy option whereas no one decided to scoop themselves an unhealthy option.  Our brain works in mysterious ways.

What this study left out was the factor of laziness. Are more people willing to eat something simply based on the convenience of having something prepared versus having to get it themselves?  Was one group that entered the room and saw the sign more health conscious than the other groups which could completely skew the results?

There are many unknowns, but it’s worth noting that our subconscious mind seems more willing to accept unhealthy food options when they are handed to us ready to consume, rather than forcing someone to make the right decision for themselves…..answering only to the man in the mirror.