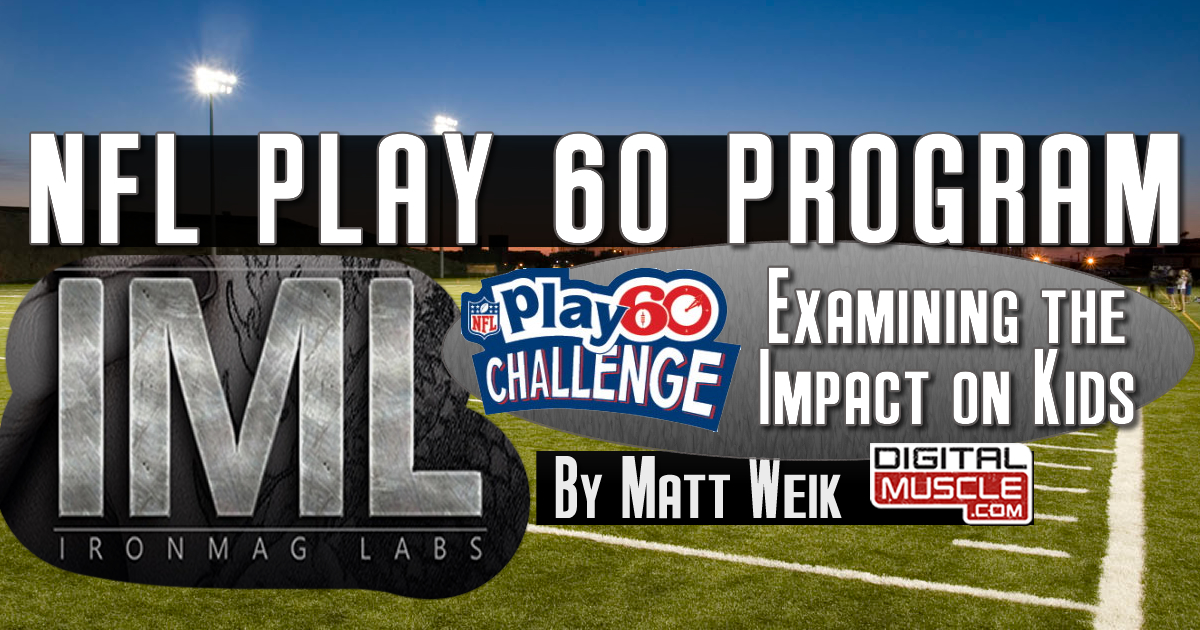 If you’re a sports fan, I’m sure you’ve heard of the NFL PLAY 60 Program.  This program was designed to help our youth get and stay active.  The National Football League Foundation has put a lot of time, money, and effort into this program over the past ten years.  While in theory the program should do a lot of good for our youth, no one ever truly analyzed the effectiveness of the program, until now.

NFL Play 60 was launched back in 2007 in an effort to help get our youth active and healthy.  Through the backing of several NFL players such as Tom Brady, Tony Romo, and Reggie Bush, the program quickly grew legs through media campaigns that were launched on national television during prime times, with big time exposure during the Super Bowl, Pro Bowl, holiday football games, as well as during the start of every NFL season.

I commend the NFL for putting together and sponsoring a much-needed program to help get our youth off their butts and active versus going home after school and sitting in front of the television or on their gaming devices. My only complaint is that I wish they would have opened it up more so everyone could benefit, rather than having them cherry pick who can use the program. I understand there’s a financial constraint, but wishful thinking on my part.

A study was conducted through the 500 participating schools, assessing around 100,000 students between 2011 and 2015. We need to have full disclosure on this study (not saying there is bias, but it needs to be put out there) that the NFL funded this research.

What the research showed was that the NFL PLAY 60 program is indeed helping our youth by improving their body mass index (BMI) as well as their aerobic capacity.  The study specifically focused on their two most successful programs being the Fuel Up to PLAY 60 that is part of the National Dairy Council as well as the NFL PLAY 60 Challenge which was put in place by the American Heart Association (AHA).

When looking at the results of the program, they found that the total number of students that were classified as overweight or obese declined. They also showed that more students were now meeting the national health standards for aerobic fitness.  Researchers noted that it appears schools that used the program all four years had the greatest improvements when compared to those who only used the program for 2-3 years.  Due to the success of the program, the NFL is looking to provide funding for an additional five schools in each of the 32 cities that are currently hosting the program.  It would be nice, however, to see the NFL expand into more cities, allowing for more diversity in the program.  Maybe open it up to 50 hosting cities?

One researcher said, “Our research shows that NFL PLAY 60 programs actually work in reality based on data collected over the past four-to-five years. It’s rare to see such a large-scale program involving around 1,000 schools over multiple years.  It’s different from conventional intervention programs in that teachers and staff along with parents and community members are the key players in promoting healthy eating and a physically active environment for kids.  The program cannot be sustained over time without those motivated and hardworking teachers.  We are eager to see how this additional funding and support might help local teachers and their students.”

While this program has done a lot of good for our youth, I feel as if this is just the beginning. While 500 schools participated, there are thousands more in need of something similar—whether they are forced to start their own program or through the NFL expanding out and funding more host cities.  Either way, we are on the right track but have a lot more work to do.  The statistics for our youth is showing a slow increase in kids becoming overweight and obese.  This is a combination of their nutrition as well as their activity level.  Programs such as the NFL PLAY 60 have done an amazing job making exercise (through physical activity/play) look fun for kids of all ages.  It allows them to come together with friends and move, rather than going home and being sedentary.

I implore the NFL to consider funding more host cities (outside the 32 currently) and allowing this to be a nationwide program to any school district who would like to use the program. I would also like to see more NFL players getting involved.  While there are a bunch currently, I feel through their voice and image, they can truly help to continually grow the program.  In fact, I’d like to see athletes from every team being active in their state with the NFL PLAY 60 program.  I understand they get paid to entertain us on Sunday’s, but they can always do more for the community.  Giving back to the kids and helping instill healthy habits is extremely important for the future of our youth.  While I’d give everyone a high five for their work thus far, I’d also give them a pat on the butt and tell them to get back in the huddle and get back to work.  There’s still a lot of work to be done.