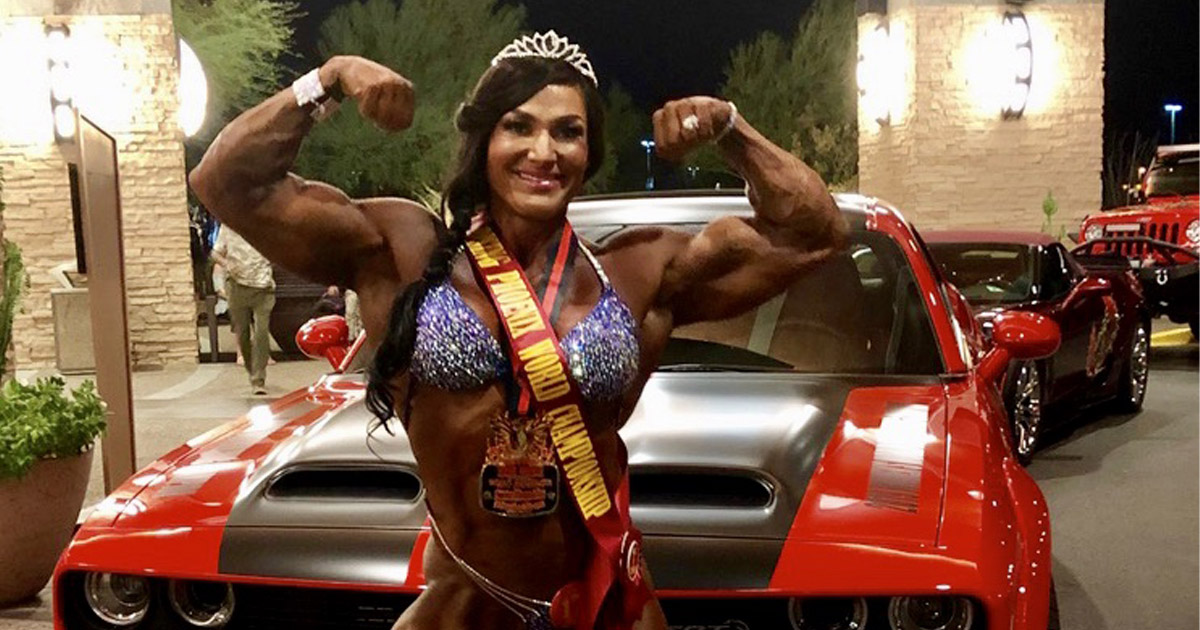 Empowering and amazing—overworked words for sure, but nothing short of them describes the 2019 Rising Phoenix Women’s World Bodybuilding Championship and Arizona Women’s Pro mega event that went down in at the Wild Horse Pass Hotel in Chandler, Arizona, on September 7. A total of 111 female IFBB pro athletes in five divisions took the stage at the show, which was highlighted by the crowning of a new queen of women’s bodybuilding, a return to the top for 2017 winner HelleTrevino.

Brought to life by Jake Woods and Wings of Strength by way of Tim Gardner Productions, the Rising Phoenix is in its fifth year, having risen from the ashes of what was reportedly the imminent death of women’s bodybuilding. With full lineups in fitness, figure, bikini and women’s physique, and offering lots of cash prizes, it is unique on the current IFBB circuit for its spotlight on female athletes.

With 2018 champion Alina Popa sitting this one out, the contest came down, as expected, to two former champs, Trevino andMargie Martin. “Marvelous Margie,” with two Rising Phoenixtitles under her lifting belt, had the advantage in terms of size and structure, and it was hers to lose, but two things happened: 1) Trevino brought the best she had to bring, at least equal to the sliced physique she displayed in winning the Tampa Pro a month earlier, and 2) Martin did indeed look marvelous, but she wasjust not conditioned enough to deny Trevino her second Rising Phoenix title.

So, Trevino rose from the ashes of her fifth-place finish in 2018 to score a unanimous win, while Martin took the runner-up spot,for the second year in a row, for lack of a little conditioning.

Irene Anderson outmuscled the rest of the 19-woman lineup to slide into third. The Swedish veteran carries some serious muscle on her 5’7″ frame, and this was the best total package I’ve seen on her. The judges must have thought so too—it was also her best Rising Phoenix performance to date.

Nikki Chartrand had a big night, repeating last year’s fourth-place finish and picking up two ancillary awards. Her solid, symmetrical physique was a bit more defined than last year, but she couldn’t get past Anderson’s imposing package to move up.

Also commanding attention was Romanian Muscle Fest winner Monique Jones, who rounded out the top five. At 5’9″, with quality muscle and an X-frame to die, she, too, earned her best Rising Phoenix placing to date.

Wings of Strength has added some bells and whistles to the Rising Phoenix you don’t see at the average bodybuilding show. In addition to a $100,000 purse, with $50,000 to the winner, Trevino took home an 800 HP Dodge Challenger Hellcat, worth about $100,000—now known as the HelleCat—plus some other goodies, and there were money prizes for the most muscular athlete, the top five posers and the top three videos, produced by the athletes to introduce themselves before they pose at the finals.

Aleesha Young, who was not in her best condition due to training injuries, still managed to earn most muscular honors. Mona Poursaleh had the best posing routine, with prizes going to, in order, Janeen Lankowski, Nikki Chartrand, Kristin Mendoza and Theresa Ivancik.

Italy’s Sylvia Matta had the best video, with Aleesha Young and Nikki Chartrand also getting awards.

I have to confess, the videos really got to me. Women from many countries, from all walks of life—women with jobs, kids and grandkids—talking about why they dare to be different and do what they do, and how they find the strength and determination to keep doing it. I’m a sucker for that stuff, so kudos to Wings of Strength for creating that entertaining feature.

Full lineups in all the divisions made a busy day for the judges(the program also included a new NPC event, the Arizona Women’s Extravaganza). The Arizona Pro is the last opportunity for Olympia-bound athletes to tune up for the big show on September 13-14.

In fitness, two athletes dominated the 13-woman field, Ryall Graber and Jeanine Taddeo. Graber was the defending champ—as well as 2018 Olympia runner-up and 2019 Fitness International champ. Taddeo took the Europa Phoenix Pro and was second to Graber at this show last year. This time around, Taddeo had the best physique, but Graber had the best routine, which is two-thirds of the score, so Ryall grabbed the repeat winand Jeanine repeated in second. The two will face off again at the Olympia, along with a lineup of the world’s best fitness athletes.

Another repeat–performance Olympia tune-up came in the figure division, where reigning Figure Olympia champ Cydney Gillon breezed to her third straight Arizona Pro win. The queen of the X-framers brought her full, symmetrical physique to near Olympia condition and looked on schedule to dial it in the following week.

Bikini was one class where the defending champ did not repeat. That would be Jennifer Ronzitti, who was not at her best and slipped to fourth after taking it all last time.

The judges showed a clear preference for Monica Ellis, who took the title with a perfect score. With her smooth, symmetrical lines—nothing exaggerated or out of proportion on this body—Ellis moved up from third last year with ease.

It was the biggest class, by the numbers, with 33 shapely bodies onstage. Amy Larson, who displayed another smoothly put together body, took the runner-up spot, and Kim Gutierrez got the nod for third. All four women mentioned were headed to the Olympia, where anything can happen.

The women’s physique battle featured an upset victory by Penpraghai Tiangngok over 2019 winner—and Olympia runner-up—Natalia Coehlo. Sporting a true total package of size, symmetry, definition and a beautiful V-taper, Penpraghailooked unbeatable, even standing next to the famously shredded Coehlo. This win, along with her third-place finish at the 2019 Arnold Classic Women’s Physique International last March, make her a force to be reckoned with in the 2020 season ahead.

Jennifer Taylor and Trish Wood were tied for third, with Taylor getting the nod after tiebreaker rules were applied. MargitaZamolova rounded out the top five.