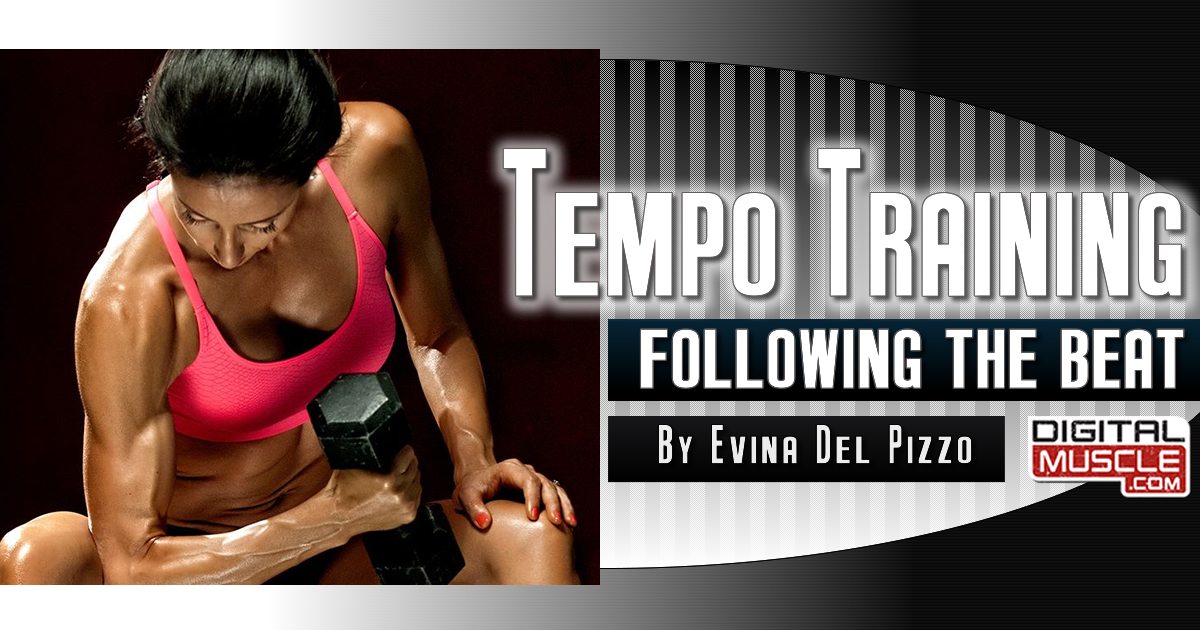 As you may have noticed in my previous posts, I talk a lot about workout tempo. In most of my workouts, I make sure that I am contracting the muscle in a specific tempo that will give me the most for that muscle from the range of motion—for example, using a four-count on an eccentric move or maybe a concentric push on a 3:1 count. These techniques can be applied to any muscle group to help activate maximum muscle growth and reduce fat cells.

As a trainer, I’m always catching people going through the motions of a workout without really activating the target muscles. Here’s a familiar visual: a woman on a cable lat pulldown with the weight set at 20 pounds (or lighter), slouching, bending her wrists, and using momentum instead of muscles to move the weight. How about a guy who is doing a squat at 5% depth and letting everyone know he hit his PR, yet his back is hurting? These situations could be corrected if the trainees used tempo training on the eccentric (negative) or concentric (positive) part of the repetition to activate the muscles fully, including explosions (plyometrics) or holding at the top or bottom of the rep.

Let’s talk about how to use the counts. You may see “tempo” designated as, say, 1:4, 3:1, or 2:1:2 in a magazine or training program (or 3/1, 2/1/2., etc.). When there are two numbers, the first number generally represents the number of seconds in initial part of the repetition—generally but not always the positive portion, or lifting the weight—and the second is generally the time for the second part of the rep, generally the negative, or lowering of the weight. If there are three numbers, the middle one designates the number of seconds in which to hold at the contracted position.

You can follow the beat on any exercise. Take, for example, a lat pulldown done to a 1:4 count. You pull down the bar (the positive) on a one-count—taking one second—and then slow your arms to a four-count, fighting gravity against the actual weight, as you return it to the starting position (the negative).

A 3:1 count would be coming down to a three-count and exploding back up on a one-count. Try that on a leg press, and it will make your legs feel like you need triple-X pants (because they’ll swell up)! This technique will help an ectomorph achieve a dream: defined legs. Not only does it stimulate muscle growth, but it also helps your body and central nervous system control equilibrium, enabling better control of the muscles and helping them become accustomed to the weight, thus getting stronger.

Whatever the tempo, make sure you maintain your form at full range of motion. Although some fitness “gurus” have popularized using short ranges of motion, that is an advanced, specialized type of training, in which the trainee should be supervised by a professional.

What if you come across a 2:5:1 tempo? When my trainer used to give me that for squats, I’d sigh, knowing how hard I would have to work: I would come down to the 90 degree point at my knees in a two-count, hold the squat position for five seconds, and explode up as quickly as I could for a one-count. Why pause at the bottom? It helps stimulate muscle growth, as both fast- and slow-twitch muscle fibers are activated to stabilize the muscles during an extended hold. For ectomorphs, it means putting power and mass in our legs.

I would not recommend going incredibly heavy on these. Start light and increase the weight as you gain confidence and control. Give it a try with sets of 15 reps, working your way up to 5 sets of 15.

Tempo training works with plyometrics, usually with a 1:1 count. Think squat jumps, push-up jumps (from the wall or floor), and medicine ball throws, movements that are force generating, not pulls or pushes. Plyo exercises are completely explosive and can help improve athletic performance. Using an explosive tempo teaches beginning lifters how to make rapid movements, establishing the connection between mind, body, and control.

One note of caution regarding plyometrics: pay strict attention to what your body is doing during explosive exercises, as they have a higher rate of injury, due to the rapid movement.

Now that you have an idea of some different exercise tempos and how to apply them in your workouts, give them a try. A couple of tips for beginners: start with some dynamic stretching before your workout, and stretch every once and a while during it. Don’t be afraid to reach out and ask questions. You can write to me at [email protected] and send a video if you need a second opinion.

Check out the DigitalMuscle.com Training Blog for more useful info!