Is Bikini Competition For You? 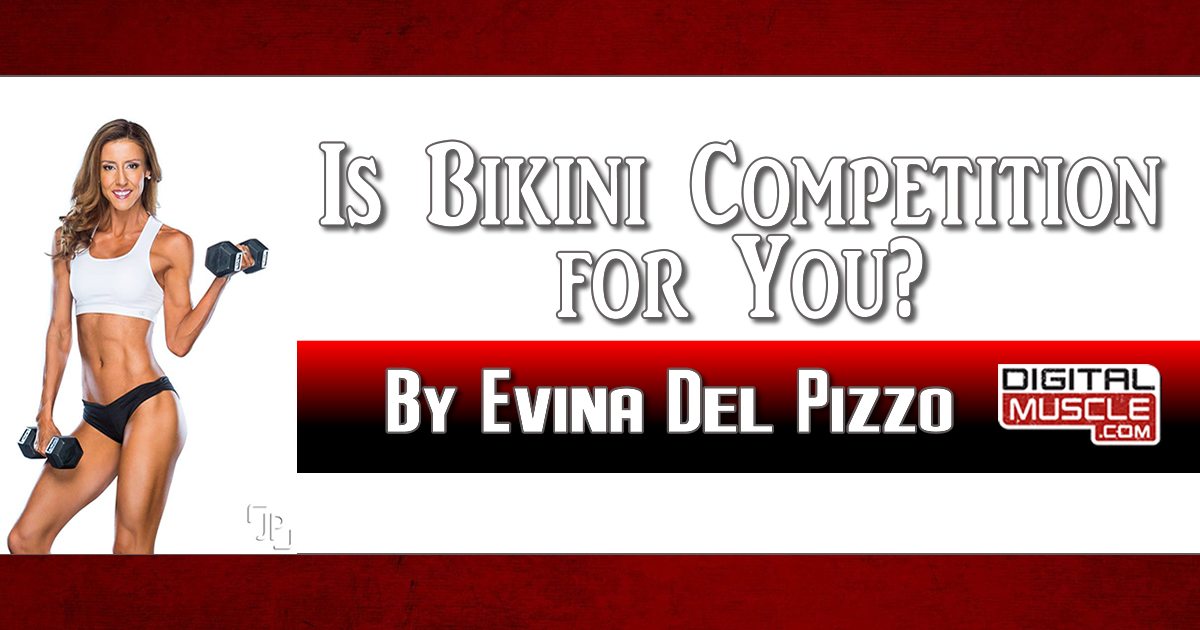 How often have you seen a friend—or someone on your social feed—talking about competing in bikini and thought to yourself, “I could do that”? Let me tell you, it’s probably not true.

I speak from experience. Back in 2010, the Hawaiian Tropic pageants, which I was incredibly proud to have participated in, were coming to an end due to the sale of the company. It was my last hoorah as Miss Hawaiian Tropic, Tucson, Arizona, and I felt my world coming to a screeching halt. I had bonded with some girls in the group, women for whom the term “sisters” wasn’t enough to describe our closeness and love for each other. I had learned so much during my seven years with the organization and had developed a fearless approach to getting noticed at our meet-and-greets. My girls were with me through the various ups and downs of my life. After the pageants were finally over, I started looking for an activity that would offer a similar competition and camaraderie. I wanted to have that sisterly connection with my fellow competitors again but in something that was more than a pageant. I wanted a challenge—something that would push my limits.

One day I was flipping through an issue of Flex Magazine and came across a photo that ended my search. It was of my Hawaiian Tropic sisters Kathleen Tesori, and she was standing at the center of a group of girls who were built like stallions. Looking at that photo of someone with whom I had previously competed, I thought, instantly, “I can do that!” I convinced myself that since I had a Hawaiian Tropic title and pageant experience, I would blow those girls out of the water. With no proper training, workout regimen, or understanding of attire, I entered my very first bodybuilding show, an NPC bikini competition that was held in Santa Monica, California, in 2011, in conjunction with the IFBB Flex Pro. I placed 16th, along with 40 other girls. I was heartbroken and confused, and I definitely felt as if I didn’t belong there. But the competitor inside me wanted to know where I had gone wrong—what I did, or didn’t, do that had caused me to place so low. I couldn’t figure it out, until an online thread about the competitors threw it in my face:

“Too little muscle,” “Glutes sit too low,” and, finally, the kicker—”Too skinny.” Coming from a fashion-modeling background, I lost it at being told I was too skinny. I was used to skipping a few meals to ensure I was thin enough.  Fast-forward through several competitions, each of which I lost. Finally, after roughly two years of hard work and dedication, I was able to earn a fifth-place trophy. That included countless hours of talking with friends who had become pros, in addition to training under the watchful eye of IFBB pro wheelchair bodybuilder Victor Konovalov.  At the same time, I was also going to school and working two jobs just to be able to purchase a few cans of sardines at the 99¢ Only store because I needed a source of protein. Once I finally reached the national level and entered a pro qualifier, I realized there was no way I could ever develop my hardgainer body enough to be competitive with those women. Am I qualified on that level? Sure, but will I ever earn my IFBB pro card? Probably not. At that point, I knew enough to understand that my body was saying it was done. Did I stop competing? No. For one thing, I enjoy it purely for the joy of winning something. Yup, I said it—I like the trophies. Still, there’s a lot more to it. As a kid, I never applied myself to the things I loved, never really put in the effort to become something great. I always made it to the tip of almost achieving my goals, but I’d back out due to self-doubt, social pressures, and feeling ostracized. Deep down, I knew I was greater than all my failures, but I wallowed in the paralyzing fear of being less than them, or even just being seen that way. Fast-forward to the present. Everything has changed, and definitely for the better, but it had to get worse before it did. I struggled for many years after my first show, trying to understand my body and what I could do to make myself stand out. For the longest time I didn’t think I could belong. I thought people in the fitness world would reject me because of my long, thin body type.  That didn’t stop me from continuing to go to the gym and learn about my body. It didn’t stop me from going to school and working three jobs or from having the passion to stay in the fitness industry.  As a trainer, I meet a lot of women who all want the same thing. They want to get a “fit body” in a short amount of time so they can compete. When I tell them it took me six years to step onstage at a national show, I see their excitement about getting to work fade. When I take on new clients, the first thing I tell them is that they probably are not going to want to compete.

You’re going to feel like garbage, I say. You may even ruin your body. You have to be built for this—not physically, but mentally. You have to want it so bad that taking it on will lead you to developing one of two things: an eating disorder or a better relationship with your body. I see more of the former than I see people becoming happier with the body they have.

So, why do I do it? Because health and fitness are at my core. Competing isn’t what defines me; it is a bunch of little milestones I set up for myself.

Competing keeps me in the gym. Without it, my depression and self-doubt can set in and paralyze me from doing anything. I make sure I do some kind of workout at least five days a week, to release my inner demons—the ones that are constantly telling me I am not good enough. That is my truth.

I love talking with other fitness professionals who have stories similar to mine. I have turned my failures into countless jump squats and hours of time under tension. Over and over again I have taken ruthless criticism about what my body should look like. I have spent thousands of dollars on tanning, makeup, hair, bikinis, and much more, in the hope that I can get the attention of the head judge and possibly earn a first-place trophy, only to realize that the color of the bikini didn’t compliment my skin or that someone else brought her A+ game that day. Yes, you should compete if you want to, but you must find your own truth. There’s a good chance you’ll never want to do it again. It takes a certain attitude and stubbornness to keep going when a lot of people are telling you that you aren’t good enough. So, if you’ve got that—if you have the drive, the need, the compulsion to compete in bikini, for whatever reason, by all means take the plunge. Wishing you good luck…and a rewarding experience onstage and in the gym!

And be sure to visit the updated Nutrition Blog here at DigitalMuscle.com!